For other uses, see 'Til Death.

3376.5 - 3378.7
"'Til Death" is the third of five Star Trek: The Original Series manga stories from the 2006 anthology Shinsei Shinsei (New Life, New Star), published by TokyoPop, written by Mike W. Barr and drawn by Jeong Mo Yang. During a wedding ceremony, the USS Enterprise was attacked by two groups of missiles from the lifeless planet below. Investigating, landing parties found a sarcophagus at each launch site, each containing a body.

Captain's log, stardate 3376.5
Science Officer Spock reporting: The Enterprise, resuming its mission of mapping unexplored planetary systems in deep space, is investigating a world that, though of the proper age and circumstances to bear life, appears lifeless.

On the rec deck, Kirk joins Becky Randall and Tom Markham in marriage. Visiting Dr. Pierson attends, asking Kirk if he's ever thought of getting married, but he says he is married to the ship, like all starship captains.

Two missile salvos strike the ship from the surface. Suspecting the launches to be from automated systems, two landing parties beam down, discovering at each launch site machinery containing a body.

Captain's log, supplemental
The sarcophagi — if that's what they are — have been beamed aboard the Enterprise for further examination. There have been no further missile attacks.

Captain's log, supplemental
Incidents of violence between men and women have broken out all over the ship, which is contributing to a massive breakdown of command. And Engineer Scott reports a power drain that has begun to deplete the ship's energy reserves. Its course — and its destination — is unknown. I have called an emergency meeting with some of the senior staff to come up with solutions to our mounting problems.

McCoy develops a neural neutralizer to temporarily offset emotional outbursts. With not enough power to beam the sarcophagi off the ship, Kirk sends the male crew to the secondary hull and women to the primary hull.

Captain's log, supplemental
Mr. Spock and I are examining each sarcophagi in an attempt to disable them. Now that the rest of the crew has been separated, I expect no further violence.

Kirk and Spock find that the security teams around each sarcophagus have killed each other. The sarcophagi open, with a rejuvenated woman emerging from one and a man from the other. Faron and Nadira telepathically compel the crew to join them in a mortal battle of the sexes.

Captain's log, supplemental
The situation continues to get worse. The two sections of the ship have been entirely taken over by the two aliens along with most of my officers.

Spock telepathically discovers that fighting by the two aliens destroyed their planet. The two aliens order a saucer separation, with each intent on destroying the other half of the ship. After separation, but before weapons can be fired, Kirk beams the two aliens face to face. They then fight and kill each other, releasing the crew.

Captain's log, stardate 3378.7
Science Officer Spock reporting: The Enterprise is making its way to a rendezvous with technicians from Starbase 13, where the two sections of the ship will be rejoined. Despite our experience, we were unsuccessful in learning the name of the planet on which we found Faron and Nadira. However, if Earth legends can be considered at all a reflection of our universe, I submit this planet's name was not Eden.

"not Eden"
Referenced only
Earth • Starbase 13

Planetary defense systems were seen in: 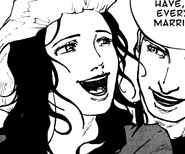 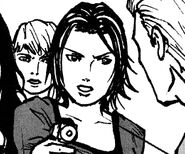 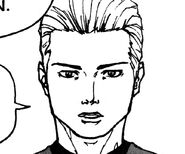 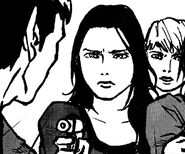 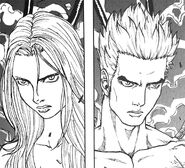