The Original Series (Marvel TOS) No. 11

7935.6
"...Like a Woman Scorned!" was the 11th issue of Marvel Comics' series of Star Trek: The Original Series comics. It was the third of ten comics written by Martin Pasko, beginning a six-issue run. It was the debut for artist Joe Brozowski, who pencilled three comics and 22 covers, as well as the first of four comics inked by Tom Palmer.

Captain's log – stardate 6352.4: Due to a transporter malfunction, we have been stranded on the surface of the planet Andronicus for over two solar days. Already the landing party has begun to feel the debilitating effects of the radiation which bombards this planet. This may well be my last log-entry... as I expect death by radiation poisoning to occur within the next four hours!

Captain Kirk and his senior staff have been watching the last log of Captain Ryan of the USS Lafayette. Ryan and his landing party were killed by Berthold radiation emitted by Andronicus' star. Psychiatrist Carl Wentworth has founded a private clinic on Andronicus protected by a dome of transparent neutronium shielding. However, radiation is leaking into the dome, and the Enterprise is headed to Andronicus to evacuate Wentworth and his patients.

The ship arrives at the planet. Heading to the transporter room, Kirk, Spock and McCoy discuss Wentworth's reputation as a "cult leader" or "con artist". Kirk notices that Scotty looks downcast. The first person to beam aboard is Wentworth's assistant, Andrea Manning. She recognizes Scotty, whom she addresses as "Montgomery", but he is clearly unhappy to see her.

Captain's log – stardate 7935.6: We are en route to Starbase 28 with our passengers. Since the awkward moment in the transporter room, rumors have been flying among the crew concerning Commander Scott and Ms. Manning... Meanwhile, the irascible Dr. Wentworth has requested a tour of the Enterprise. We are doing our best to accommodate him – no matter how much that may tax our ability to be diplomatic...

Scotty's efficiency has declined due to the presence of his one-time lover Andrea Manning. Wentworth chastises Uhura for allowing Kirk to order her around. She retorts that they are on a starship, but Wentworth opines that "we are each starships". As Scotty, distracted, goes about his work in Engineering, an intruder alert sounds. Picking up the reading on the bridge, Chekov dispatches a security team to Engineering Deck Three. A witch-hag has appeared in Engineering and advances on Scotty, who falls back in terror. Two security men enter and fire at her. Kirk and Spock arrive in time to see her intensify the stun-level phaser fire and turn it back on one of the security officers, dematerializing him. Kirk orders the other security guard to hold his fire, but the hag increases the size of the man's phaser pistol, which crushes him to death. As the hag advances on Scotty, Kirk leaps at her but is thrown against the wall by a blast of magic. Spock tries to nerve-pinch her but finds her to be incorporeal. Tossing Spock away with another burst of magic, she vanishes.

Captain's log – stardate 7941.2: The bizarre apparition in the engineering complex has vanished as mysteriously as it appeared... Although the intruder did not attack Mr. Scott directly, its mere presence seems to have left him in a state of near paralysis. The exact cause remains unknown...

Scotty lies in Sickbay in a coma. The ship's sensors detected the being as energy appearing and then disappearing, although this violates the law of conservation of energy. Scotty murmurs the name Black Annis. Wentworth hypnotically encourages Sulu, Uhura and Chekov to take control of their destinies by defying their orders to take the ship to Starbase 28; Sulu suggests going to Drexler II instead.

Chapel asks Andrea, who is drinking Saurian brandy, if she could give Scotty some moral support. Andrea retorts that Scotty ended their relationship because he was more interested in Engineering than in her, and that he can "go to the devil!" Spock has discovered from the library computer that "Black Annis" was a witch in Scottish folklore. Kirk arrives on the bridge to find the ship off-course; Sulu tells him they are going to Drexler II and refuses to change course. Kirk calls Security. Scotty, now awake in his quarters, tells Spock and McCoy he has never heard the name "Black Annis", which Spock thinks he may have retrieved from his subconscious. Scotty is again terrified as another creature materializes. Sulu and Uhura have just been arrested when Chekov receives an intruder alert for Scotty's quarters, where a giant bird called a direach has appeared and attacks McCoy. Spock attempts a nerve pinch, but the bird lashes out at him. It reflects back the phaser fire of a passing crewman who tries to stun it, stunning him instead. Still speaking to Chapel about Scotty, Andrea becomes agitated and collapses. While fighting Kirk, the bird disappears.

Captain's log – stardate 7942.6: Andrea Manning has been placed under restraint in Sick Bay, as we have begun to suspect she may be dangerous... Mr. Scott and Dr. McCoy are covered with plastiskin bandages...

Because Andrea passed out drunk at the moment the bird disappeared, McCoy thinks she may be making the creatures appear. From the bridge, Chekov reports that all departments are reporting mass insubordination. Wentworth pulls a phaser on him and makes him cut off the transmission, then forces the helmsman to resume course for Drexler II. Chekov surreptitiously reopens the channel to Sickbay, allowing Kirk, Spock, McCoy and Chapel to hear Wentworth reveal that he is using Andronican mind-control techniques, while Andrea is turning energy into matter to make imaginary things real. Wentworth plans to free the galaxy from all those who would deny people freedom, proclaiming that "if ever there was a man who could aspire to godliness, and a woman who could turn that dream into a reality, we are they!"

McCoy, Scotty and Spock realize that Andrea is taking revenge on Scotty by actualizing his subconscious memories of Scottish folklore. Spock mind-melds with Scotty to cut off Andrea's energy supply in Scotty's brain impulses. Kirk heads to the bridge and exchanges phaser fire with Wentworth, who hypnotizes him into thinking he would rather have remained an admiral. Spock has erased all memories of traditional Scottish monsters from Scotty's mind, and McCoy renders Scotty unconscious with quadrothorazine. Andrea is furious when she awakens in Sickbay to find Scotty near her. The ship rocks as something strikes its hull, breaking Kirk's eye contact with Wentworth and freeing him from his spell. He knocks out Wentworth, only to see the Loch Ness Monster on the viewscreen wrapping itself around the Enterprise. McCoy sedates Andrea and the creature vanishes.

Captain's log, stardate 7947.5: Wentworth and Manning will be remanded to a rehabilitation facility. Because my crew were the victims of total mind control, no charges will be brought against them...

Spock explains that he drew Scotty's memories of Scottish monsters into his own mind, failing to realize that Andrea could access them from there as well. When McCoy says that Spock's mistake makes him seem more human, Spock says he will allow himself no margin for error in the future.

A security guard crushed by his giant phaser. 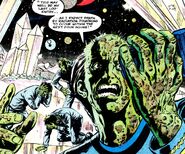 Ryan (USS Lafayette) and his crew on Andronicus.