Captain's log, stardate 8215.5
The Enterprise has been ordered to the Regula I Space Lab to obtain vital scientific data. I have waited fifteen years for this chance, and will let nothing stand between me and my goal.

This issue introduces the mirror universe crew of the Star Trek movies era, in the year 2285. This could be taken as contradictory, as many of the characters died years earlier in other licensed mirror universe adventures.

The uniforms in this appearance were somewhat of a combination between the Terran Empire Starfleet uniform seen in TOS and the regular universe's maroon uniform of that era. The Terran Empire badge was moved over to the opposite side of the chest to avoid covering the maroon jacket's closure. The new version of the Terran badge introduced here featured the same lozenge-shaped backing patch as the standard universe Starfleet 2280s badge. 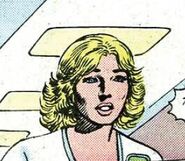