This article is about the comic. You may be looking for TNG episode: "Where No One Has Gone Before".

TNG Magazine
Mysteriously intercepted while beaming down to the supposedly peaceful planet Syntagus Theluv, the Away Team of Commander Riker, Counselor Troi and Lieutenants La Forge, Data and Yar find themselves in the middle of a war!

Captain's log, stardate 41187.5
The USS Enterprise slices through the pitch thickness of an unmapped sector like a shaft. Her own legend, and those of her predecessors, serving us as fuel for this and all her subsequent missions. Manned by Federation officers and crew, who engineer each step of our quest for understanding... propelling us further and deeper than ever before—in a seemingly endless thirst for knowledge and harmony. Traveling with us, the constant reminder of why we're out here... families, most notably children. The generations of the future who deserve to know what's out here in order to press on. Their very presence is my pressure to perform—our need to succeed. That's what drives each and every one of my bridge crew.

The USS Enterprise makes contact with the Theluvians, the native inhabitants of Syntagus Theluv. Their greetings are friendly, but the ship is suddenly fired upon from the planet. An away team transports down but is also attacked. The away team subdues their foes and all are picked up by a Theluvian ship, where they learn that the Theluvians age backwards - the "adults" who attacked them are actually children playing a game, and the "children" who picked them up are adults.

The concept of a backward-aging race had previously been presented in the TAS episode: "The Counter-Clock Incident" at the time this story was published. The concept would be revisited in the VOY episode: "Innocence". 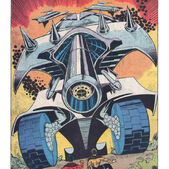 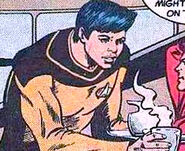 According to a TNG timeline published by DC Comics, this story is set between "Encounter at Farpoint" and "The Naked Now", although the events of the series seem to be set after several other episodes had taken place.