"... Wild Goose Chase!" was a two page game insert in Star Trek Annual 1978. The premise of the game involved the crew of the USS Enterprise collecting technology from six tribes, each living on a different plateau of an alien world.

While in orbit of the planet Klatoor, James T. Kirk, Leonard McCoy and Spock discussed the complexities of their assignment. Temporal disruptions and disruptive magnioactivity limited the use of transporters, so they would use shuttlecraft. Personnel were required to visit six isolated tribes on the surface, each of which possessed a component to a building a device of critical importance to the Federation. 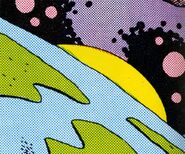 Klatoor
Add a photo to this gallery

Retrieved from "https://memory-beta.fandom.com/wiki/..._Wild_Goose_Chase!?oldid=669523"
Community content is available under CC-BY-SA unless otherwise noted.