The unproduced animated series entitled Star Trek: Final Frontier was to take place in the early 26th century. The show's backstory has Starfleet losing its way and becoming a xenophobic organization which focuses on protecting its borders rather than exploring the unknown and helping those in need. This is due to a horrific attack which devastated subspace, leaving huge regions in which Warp drive doesn't function. For more info on the series, see its website. 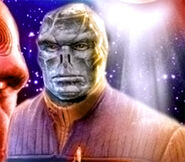 Images from the 26th century