A Bomb in Time

A Bomb in Time

19:25.9
A scientist escapes into time with a doomsday bomb! – "A Bomb in Time" was a Star Trek comic book story published by Gold Key Comics in 1976, the 36th issue of their TOS series. It was the 9th of 21 stories written by Arnold Drake. It was the 32nd story with artwork by Alberto Giolitti. Angelo Todaro worked on pencils and inks.

In this story, James T. Kirk and Montgomery Scott time travel into Earth's past to recover a bomb.

Hunting a needle in a haystack — even one that would rival the pyramids — is child's play compared to the staggering search that occupies the crew of the starship Enterprise as they hunt for — A Bomb in Time.

We have put in at Research Satellite-5 to examine their latest developments!

Doctor Steckler gives Montgomery Scott, Spock and James T. Kirk a tour of the space station, showing them a variety of inventions. They are interrupted by an alert from the time-study laboratory, where a scientist has found Dr. Lax murdered at the controls of the time travel cabinet. The scientist says Lax's last words were about finding a bomb.

Steckler checks, and the station's prototype N-cycle bomb has been stolen. Minutes later, a tape is discovered, left by Dr. Njam. He says the metaweapon has been hidden in Earth's past by his associate, Professor Andres, and he'll detonate it unless the Federation pays them one billion credits within 24 hours. Apparently Lax had been forced to send Andres back in time, then Njam shot him, blanked the time machine settings, and fled the space station. Spock realizes that Lax restored most of the coordinates before he died, with the machine set for southern California, but the dial for the year was left halfway between 1855 and 1955. While Spock remains to search for Njam, Steckler operates the time machine, sending Scott to 1855 and Kirk to 1955.

In search of the nitrogen-cycle bomb, Mr. Scott and I time-jumped to separate locations where the bomb might be hidden!

Scott materializes inside a stagecoach in the Old West, surprising its occupants. The coach is soon held up by Billy Clancey’s outlaw gang. As the passengers are being robbed, Scott overhears Waco talking about a doctor new in town who's reputed to perform miracle cures, and Scott thinks this may be Andres using a medkit. Waco demands Scott's money and starts to draw a pistol. Scott can't permit the highwaymen to take his phaser, so he shoots Waco's hat with his "trick gun" and asks for work. Clancey hires him, which lets Scott stick close to Waco to learn more.

Waco proposes that their next robbery ought to be the wagon train hauling Mexican silver to Don Carlos's ranch. Clancey agrees, and manages to steal the phaser while Scott is asleep. When he awakes and discovers his weapon is missing, he pursues the gang on horseback, joining the wagon train's perimeter guards in a gunfight. Clancey drains the phaser's power pack attempting to subdue the guards, then Scott subdues the criminal before he can do any more damage. Waco agrees to take Scott into town to see the miracle doctor, but they discover that he is just a snake oil salesman.

In the 23rd century, Spock apprehends Njam, discovering that the ransom was Njam's idea. Andres didn't take the N-cycle bomb for money.

Kirk materializes in a street in ancient Rome and is nearly hit by a horse-drawn chariot. He wonders if the time machine malfunctioned, then realizes he's actually in Hollywood during the filming of an ancient Roman movie. A production assistant thinks Kirk is the stuntman they've asked for, except wardrobe accidentally dressed him for a science fiction film. He sends Kirk to Bovrille, the film's director, and learns that he is supposed to perform a dangerous stunt. In the scene, Kirk fights an enemy while driving a chariot. During the fight, a sword slashes his horse's reins, and then the uncontrolled vehicle appears to wildly careen over a chasm. However, the chariot has been outfitted with hidden rockets by their gifted special effects technician, and thanks to the miniature engineering, Kirk successfully performs the stunt. His suspicions about the identity of the technician are confirmed when he discovers Andres in the special effects trailer.

Andres flees, leaping onto a chariot, and as Kirk chases him in another chariot along a freeway, the entire pursuit is filmed by Bovrille and his cameraman Zoltan. The two men struggle until Andres learns that Njam betrayed him and killed Dr. Lax. He confesses that he wanted to hide the prototype until he could be reassured by the Federation Council that it would never be used, and turns over the prototype to Kirk.

Back aboard the USS Enterprise, Scott laments that he didn't get to spend enough time with Don Carlos's lovely sister in 1855. 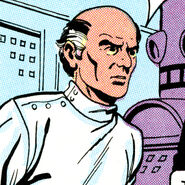 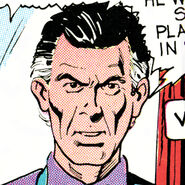 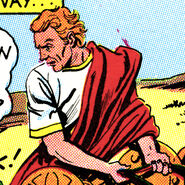 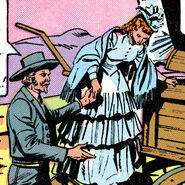 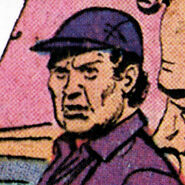 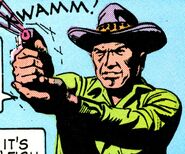 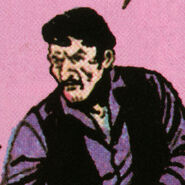 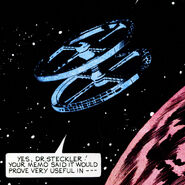 Scott in the time travel cabinet. 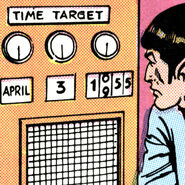 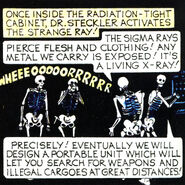 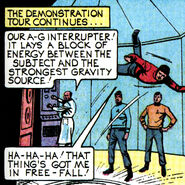 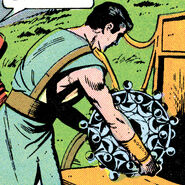 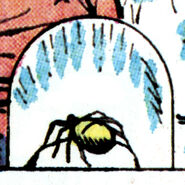