A Call to Darkness

A Call to Darkness

The Next Generation No. 9

The Enterprise discovers a lifeless Federation research vessel, orbiting a planet hidden behind a mysterious energy shield. Over the strong objections of his senior officers, Captain Picard and an away team beam over in search of the missing crew—

But soon his captain's disappearance is not the only problem facing Commander Riker. For a mysterious disease has begun ravaging the Enterprise crew. Now Riker must unravel the secrets of the planet below in order to rescue Picard—and prevent the starship's destruction.

The Enterprise is tracking the missing Federation vessel Gregory Mendel: The daughter of Picard's old mentor was on board, giving him a personal stake. Their search takes them into the territory of the Klah'kimmbri, a race not seen since they were devastated by a conflict with the Cantilac. The Gregory Mendel is detected in orbit around a Klah'kimmbri planet with no life signs aboard and Picard insists on personally taking an away team across. He orders Pulaski to accompany them, even though she is the middle of treating a crewmember who picked up an apparently innocuous infection on an away mission.

During the course of the away mission's investigation, Pulaski realises the infection could mutate into an airborne variant that constantly replenishes itself. However, as she attempts to alert the Enterprise, the away team disappear. They have, in fact, been abducted by the Klah'kimmbri, who rob them of their memories and place them in various roles in staged conflicts between those brainwashed and forcibly conscripted, which are broadcast to the population: Worf is made a warrior, Pulaski a medic, Picard is placed in charge of a convoy of waggons and Geordi is placed with a construction team.

Pulaski's prediction comes true and several crewmembers are affected by a variant on the infection. The Enterprise's assistant chief medical officer, Sam Burtin, wants the ship to go to starbase but Riker decides to wait three days. Meanwhile, Dan'nor, the Klah'kimmbri supervisor who transported the away team after mistaking them for crewmembers on the Mendel who had been missed, is made a scapegoat by a rival and dismissed from the military. Soon after, he learns that his father is a member of a group of rebels who realise the conflicts are being used by the council to keep the population too distracted to realise they are kept in servitude. One of their number, Ralak'kai, has been arrested and placed in the conflicts, where he has befriended Picard.

Picard and Ralak'kai are captured during a skirmish. Geordi sees them and frees several of their fellows but is captured himself, with the three of them sentenced to be executed. Worf witnesses several warriors being freed from conditioning by the lights of a storm and then killed by the marshals. Deserting from the dishonourable combat, he meets Pulaski, who is freed by the flash of an exploding camera. They end up joining up with a group of rebels who have entered the grounds to rescue Ralak'kai.

Data has realised what is going on and Riker gives him two days to beam down and find their people, since he resembles the Klah'kimmbri. Since he based his disguise on a council member, he is mistaken for a member of the ruling caste and manages to position several brainwashed Federation personnel to be safely beamed clear. He is trying to arrange the release of Picard and La Forge when the rebels make their move and he and the other senior staff are beamed back.

Pulaski has realised that, since she was unaffected by the disease, an ingredient in the food they were given is a cure. The Enterprise uses exploding debris to free the remaining conscripts and the council allows the Enterprise to take them off planet for return home. With the conflicts at an end, the rebellion starts in earnest. 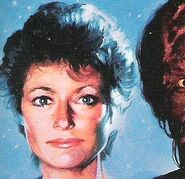 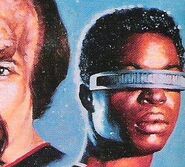