Star Trek: The Next Generation – A Final Unity is an adventure game by Spectrum HoloByte, based on the Star Trek universe. It puts the player in control of Captain Picard and his crew of the Enterprise D and features traditional point-and-click adventure game play as well as free-form space exploration, diplomatic encounters and tactical ship-to-ship combat.

The cast of Star Trek: The Next Generation reprise their roles, providing the voices of their respective characters.

While on routine patrol of the Romulan neutral zone, the Enterprise intercepts a distress signal from the crew of a Garidian scout ship, seeking asylum in Federation space. After a brief confrontation with the commander of a Garidian Warbird (similar in design to a Romulan D'deridex Warbird except with a red starburst design on the nose), the crew of the scout ship is beamed aboard the Enterprise. One of the refugees mentions to Captain Picard that they are in search of the Lawgiver's legendary "Fifth Scroll", which could aid in preventing war on Garid. Picard agrees to assist them, and the crew of the Enterprise sets out in search of clues to the location of the scroll.

After searching various star systems and completing several away missions, the crew of the Enterprise realizes that the scroll points to the existence of an enormous and powerful ancient structure, known as the Unity Device, that was created by the Chodak, an unknown alien race, during the peak of their civilization.

The storyline takes place around stardate 47111.1, according to the opening sequence of the game. This would place the events of the game between the first two episodes of the seventh season of the series, "Descent" and "Liaisons". The non-canonical Chodak race reappear in the Star Trek Generations game.

The game's introduction is similar to the teaser of the 1990 TNG episode The Defector episode: . There, the Enterprise encounters a D'deridex-class Warbird pursuing a Romulan scout ship which requests asylum. Both ships pass through the Romulan Neutral Zone and Picard orders red alert. Eventually the pursuee is transported on board the Enterprise.

The sprite of Jean-Luc Picard is often seen readjusting his uniform (among fans, the notorious "Picard maneuver"). Similarly, the sprite of Geordi LaForge often imitates LeVar Burton's characteristic habit of clasping his hands on his lap, seen throughout the series.

In the tutorial animation, there is a brief description of the tactical screen; one can see the option "Picard Maneuver" in the menu. However this option is not available in the actual tactical screen. 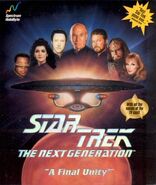 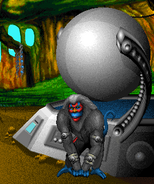 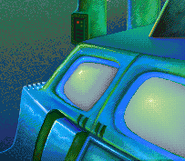