3012.4
A Little Seasoning was the first issue in the four-part Star Trek: The Original Series miniseries The Modala Imperative. The story was initially published by DC Comics in July 1991, then reprinted in a miniseries omnibus in October 1992. This story was written by Michael Jan Friedman and drawn by Pablo Marcos. In this story, James T. Kirk took Pavel Chekov on his first landing party mission.

Captain's Personal Log, Stardate 3012.4
It's been ten years now since I last visited the planet Modala -- the natives' name for Beta Damoron Five. Of course, I was only a lieutenant then and the Enterprise was someone else's ship. Chris Pike's, to be precise. Back then, I was part of the survey team that recommended Modala for Federation membership -- but not quite yet. I said the Modalans need little more seasoning first. After all, they had already mastered spaceflight, and while they hadn't yet run into any starfaring civilizations, it was only a matter of time before that would change. Starfleet brass agreed. They decided that Modala was still a decade away from an invitation. So here I am, ten years later, to conduct a second survey. To see if the Modalans have come as far as expected they would. As before, of course, we'll want to remain unobtrusive. Native garb and all that. Otherwise, we'd be taking a chance on violating the Prime Directive. That's why it'll only be a two-man landing party. Myself -- and one other.

Ensign Pavel Chekov was distracted at his bridge station, earning a reprimand from Montgomery Scott. Hikaru Sulu visited him later in his quarters, but he couldn't get the young navigator to admit to being nervous about going on his first landing party mission. Meanwhile, in the recreation room, Kirk and Spock discussed the Modala mission over a game of three-dimensional chess.

Kirk and Chekov beamed down, but were surprised to find the planet in the throes of a military dictatorship. They hoped to learn more, but Modalans were hesitant to talk openly. Suddenly an explosion blew apart the front of a government building, cheered on by rebels in a truck. But they were spotted by a squad of police officers, who fired at them with rifles — energy weapons too advanced for Modalan technology.

Kirk and Chekov dove for cover behind a groundcar, but it was hit by a blast from one of the energy weapons and blew up. Police arrested them along with the other rebels. Kirk's communicator beeped, and he was forced to toss it under a moving car to obey the Prime Directive. On the bridge, Spock and McCoy knew Kirk's communicator had gone dead, and grew concerned. 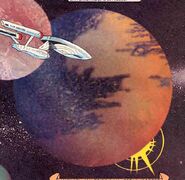 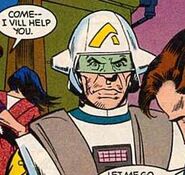 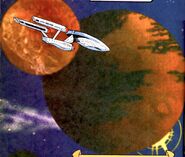 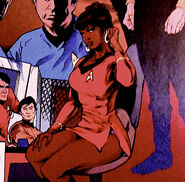