The Original Series (US Comic Strips) No. 14

8123.2
A Merchant's Loyalty is a Star Trek: The Original Series comic strip. It is the 14th story in the US Comic Strips series, published daily in newspapers over a period of seven weeks by the Los Angeles Times Syndicate. The story depicts events from Captain Kirk's second five-year mission aboard the refurbished USS Enterprise (NCC-1701). In this story, scrap merchants conspire to destroy the Enterprise and sell it as salvage.

Captain's Log: Stardate 8123.2.
We must pass through the Deltan 300 graveyard sector to make the meeting with the Komar ambassador on time. An unpleasant shortcut...

Approaching a pair of merchant ships shooting at each other, the Enterprise is suddenly fired on. Chekov disables one of the ships, then restrains both with tractor beams.

Beamed aboard are Merchant Captain Krieger of the Latimor Recycling Plant and his opponents, Merchant Captain Kro-Regas and Merchant Lieutenant Zaia from a competing salvage operation. The salvagers recycle and sell large amounts of scrap in the sector left over from the Delta Wars, but thanks to Federation peace missions, the scrap is running out and their livelihood is endangered.

Ship's Log: Supplemental.
A feisty merchant lieutenant has agreed to give up her weapon. Hopefully there will be no further delay in resolving this conflict.

Unknown to the crew, the merchants' rivalry is a ploy. While "feisty" Zaia distracts Kirk, Spock and Scotty, Regas plants a bomb on the wall of the transporter room. En route to the conference room, while Zaia and Kreiger tussle in the hall, Regas plants a second bomb on a wall near the ship's main circuits. However, Zaia drops a bracelet during the fight, which Kirk keeps. Sulu alerts Kirk to a large debris cloud approaching, and as Kirk gives the merchants a tour of the bridge, Regas hides a third bomb on the bridge's life support panel. Done with their sabotage, Regas signals for beam-up as the first bomb explodes, but minus her bracelet, Zaia does not beam away with the others; Kirk does.

Ship's Log: Supplemental.
Admiral Kirk has been captured by the merchant captains while Zaia has unfolded the plot to the crew of the Enterprise.

Sensors reveal that the debris cloud hides more than one hundred of Krieger's salvage ships. The second bomb detonates, leaving the ship defenseless. However, Regas implores Krieger not to destroy the Enterprise because Zaia is aboard and she is secretly his daughter. Krieger ignores him, locking Kirk in a storage room. Regas hides a bomb on Krieger's ship, then flies himself and Kirk in an escape pod back to the Enterprise. Spock diffuses the bomb on the Enterprise while Krieger's detonates. Seeing their leader's ship damaged, the rest of the Latimor Recycling Plant merchant ships flee. Regas says "A merchant's loyalty extends only as far as his purse strings."

Uhura reports that Deltan authorities have arrived to take Regas and Zaia. Kirk ordered the ship to Manark V. 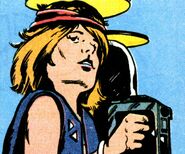 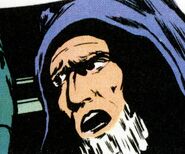 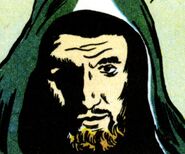