A Piece of the Action

A Piece of the Action

"A Piece of the Action" was the 49th episode produced of Star Trek: The Original Series and was released during the show's second season, first airing on 5 January 1968. The teleplay was written by David P. Harmon & Gene L. Coon and directed by James Komack. It was novelized in Star Trek 4 by James Blish and adapted as a fotonovel in 1978.

A planet that has patterned its entire culture after the gangland style life of the Chicago mobs of the 1920s.

Where arguments are settled by shoot-outs, leaders are called Bosses and enemies are outfitted with cement overshoes.

When Kirk and Spock are given an offer they can't refuse, the Feds are cut in for… A Piece of the Action.

Ship's log.
Mister Spock reporting. Incredible as it seems, Doctor McCoy and I are once again prisoners of the chief criminal boss of a society patterned after old Earth gangsters.

Captain's log, stardate 4598.0.
In response to a conventional radio signal transmitted one hundred years before by the USS Horizon, shortly before being lost with all hands, we are en route for Sigma Iotia II, an inhabited planet on the outer reaches of the galaxy.

Ship's log, stardate 4598.2.
Chief Engineer Scott recording. The captain, first officer and chief surgeon have beamed to the planet. We have received a transmission from someone calling himself Bela Okmyx who demands a ransom of one hundred type 1 hand phasers in return for the lives of our landing party. We have been given eight hours in which to comply.

Personal journal, Capt. James T. Kirk, stardate 4598.7.
We have left orbit around Sigma Iotia II and thanks to a remedy known to Bones and Scotty, have recovered from the effects of Mr. Okmyx's drinking stuff. The Iotians, however, will need more time to recover from the effects of The Book. A culture can bend only so fast without breaking. Inevitably, I am moved to speculate upon the dangers of limited cultural influence and the effects certain other books might have had. There was something pathetic yet appealing about their technology.

Referenced only
Cirl the Knife

Referenced only
Cirl the Knife

Collector's edition VHS release with "By Any Other Name". 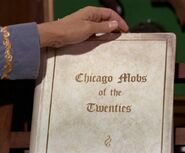