A Stitch in Time

A Stitch in Time

2376
A Stitch in Time was a 2000 Deep Space Nine novel released by Pocket Books, written by Andrew J. Robinson.

For nearly a decade Garak has longed for just one thing—to go home. Exiled on a space station, surrounded by aliens who loathe and distrust him, going back to Cardassia has been Garak's one dream. Now, finally, he is home. But home is a world whose landscape is filled with death and destruction. Desperation and dust are constant companions and luxury is a glass of clean water and a warm place to sleep.

Ironically, it is a letter from one of the aliens on that space station, Dr. Julian Bashir, that inspires Garak to look at the fabric of his life. Elim Garak has been a student, a gardener, a spy, an exile, a tailor, even a liberator. It is a life that was charted by the forces of Cardassian society with very little understanding of the person, and even less compassion.

Elim Garak writes Doctor Bashir a letter and attaches his journals chronicling his life from childhood to a return from exile to Cardassia. The tale is written by Garak in an outbuilding next to ruins of Enabran Tain's former home which Garak has taken residence in, but much of the letter was written in Garak's time on Terok Nor/Deep Space 9.

Looking back from a life as a volunteer in an emergency med unit on Dominion-decimated Cardassia, Garak recalls his involvement in the invasion of Cardassia in the Dominion War, a time when he looked back into his childhood and his development into an adult...

On Deep Space 9, preparing for the impending invasion of Cardassia, Garak debates Cardassia's future with Doctor Bashir and Odo and takes out his frustrations on a flustered customer in his shop. Later, he engages a large Klingon in Quark's who was molesting a dabo girl, Tir Remara who was a friend of the late Tora Ziyal, a chase through the Jefferies tubes results in the Klingon getting stuck and suffering claustrophobia, Garak keeps him company until he is freed.

On Cardassia, as Garak comes to the end of his childhood at the Age of Emergence he is sponsored to enter the Bamarren Institute for State Intelligence, to begin his education as a security operative. After a somewhat unaccomplished start Garak soon gains a reputation for being a skilled student, so much so that One Charaban asks him to help plan in a mock battle between third and second level students. The battle was a great success and Garak readies himself to bathe in power he would receive for that success, but he is betrayed by Charaban and returns to solitude for much of the remainder of the first level. At the end of the first three years he goes to the lower prefect's office for reviewal in the hope his efforts and reputation would move him up from the ten position in the group. Instead he finds himself in the company of Enabran Tain who informs him he will not be progressing to the second level but will instead be reassigned to another school. Garak has time for goodbyes to his few friends and leaves the next day.

On post-war Cardassia Garak takes to arranging the rubble of Tain's home into ornate patterns, unlike many of his neighbours he has no intention of rebuilding the house but instead dedicates his construction as a memorial for his mother Mila, who's corpse lies in the basement below and for all the other Cardassians who perished in the Dominion's departing blow. In the mean time his med unit is converted into a burial unit, having already saved anyone left alive they are now faced with disposing of the billion who did not.

Weeks before the invasion of Cardassia was a failure and Garak returns to Deep Space 9 where he helps the Federation crack Cardassian codes for the war effort. He has a continuing relationship with Tir Remara who turns out to be a terrorist planning to kill Garak in a misplaced mission of vengeance against Garak. Garak leaves the station with Kira on a mission to Cardassia to join the resistance.

In his youth, after leaving Bamarren, Garak returns to his childhood home to work with his father. In this short period Tolan gives Garak his first glimpse of the unorthodox teachings of the Oralian Way. This happy life is short lived, Garak is taken by his mother to the Obsidian Order to begin his work as a junior probe. His first mission is to Tohvun III to disrupt peace talks with the Federation, whilst there his partner, Maladek, attempts to defect, but by the manipulation of higher powers in the organization Garak manages to convince a Federation operative, Hans Jordt, that Maladek is unreliable, preventing the defection, maintaining the cover of the operation and disrupting the talks.

Garak's missions take him further from Cardassia for long periods of time. Tolan dies, telling Garak the truth of his parentage on his death bed and leaving Garak his Hebitian mask and a bag of Edosian Orchid tubers. Garak takes to taking up residence in various homes throughout Cardassia City, leaving crops of Edosian Orchids in his wake. Around this time he also reencounters Palandine (now the wife of Barkan Lokar) and the two eventually begin an illicit affair.

Garak is dispatched to Romulus where he takes on the identity Elim Vronok, a gardener at the Cardassian Embassy. His mission is to assassinate Tain's arch-nemesis proconsul Merrok. To do so the Romulan Senator Pelek requests his services to try and grow the Edosian Orchid in her arboretum, they would then pollinate the orchid with the White Star of Night to create a deadly toxic bloom. After three months cultivating the orchid, Garak and Pelek's Gardener Crenal take the orchids to be planted in Merroks garden, Merrok himself being a keen gardener. Two days later Merrok is found dead.

In a later operation Garak worked with Pythas Lok (his best friend Eight Lubak at Bamarren) in an operation to bring down The Brotherhood (a group of powerful political and military families) by interrogating Procal Dukat. Procal resists Garak and attacks him resulting in Dukat's death at Garak's hand.

Shortly after, Tain has a discussion with Garak. Shortly after Tain retires from the Order and Pythas Lok becomes the new head. Garak was implicated in Dukat's death and furthermore Tain was aware of Garak's affair with Palandine. He orders Garak to end the affair and to kill Lokar to maintain his cover as an Obsidian Order operative. He also demotes Garak back down to probe status.

Garak defies Tain's instructions and goes to see Palandine anyway. He is captured by Lokar and awakes to find himself being beaten, the prelude to a military interrogation. Lokar orders his men to leave them alone, and begins to interrogate and beat Garak himself, in the end Garak kills Lokar.

Garak finds himself stationed on Terok Nor, where Skrain Dukat, wishing to humiliate Garak as vengeance for his fathers death, assigns him to be a humble tailor repairing the garments of the stations two thousand residents. He is, at first, resistant and spends a great deal of time "preparing" the shop until Dukat threatens to have him working alongside the Bajoran slaves in the mining operations.

Garak arranges for Quark to supply him with the necessary equipment and decides to take his punishment as a challenge, determined to become a vital element of Terok Nor. The business develops quickly and Garak is soon charging high prices for his repair work and begins to design clothing for sale.

Cardassian reign over Bajor comes to and end and over night the Cardassians left, leaving Garak on the rechristened Deep Space 9 - a lone Cardassian amongst Bajorans and the Federation, exiled indefinitely.

On post-war Cardassia Garak attends a meeting of the Directorate, a political group forming in the hope of restoring Cardassia to its former glory. He quickly realizes he is in the wrong place and leaves. The Directorate quickly mobilizes, establishing representatives in each section of Cardassia city. Tensions extend to there fullest when Directorate cronies start to dismantle Garak's memorial, but Garak and his associates in the Reunion Project, a counter political movement headed by one of Garak's fellow Bamarren students Alon Ghemor, resist. They had prepared for such an act and the local community soon surrounds the site in peaceful protest, refusing to fight, and remaining until the level of tension drives off the Directorate personnel.

The two parties eventually agree to hold a vote competition in each sector of the city to establish the power base as the people desire. Voting in the Paldar Sector takes place in Garak's memorial, which had become a prominent public space in the recovering city. Just prior to the vote Garak manages to re-establish contact with Pythas Lok. Pythas suggests Garak look to the Oralian Way in the search for Palandine's fate.

The Reunion Project wins the majority of the vote in four out of six of the sectors and a democratic government is formed. Garak takes to attending Oralian Way meetings, which are growing in popularity as they are no longer forbidden. Kel, Palandine's daughter, had become a prominent figure in the religion but Garak had yet to work up the courage to approach her. 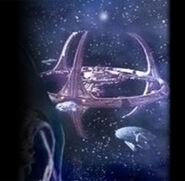 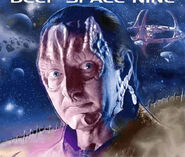