A Taste of Armageddon

A Taste of Armageddon

"A Taste of Armageddon" was the 23rd episode of Star Trek: The Original Series, in the show's first season, first aired on 23 February 1967. The episode was written by Robert Hamner & Gene L. Coon and directed by Joseph Pevney. It was novelized in Star Trek 2 by James Blish and adapted as a fotonovel in 1978.

Fotonovel teaser
A war of computers … the Enterprise has been classified as destroyed … and its crew already dead!!! Kirk and Spock have just one day to stop the war … and save the starship!

The USS Enterprise is en route to star cluster NGC 321 to open diplomatic relations with the civilization there. After several unacknowledged overtures, a message comes from the planet Eminiar VII, the principal planet of the cluster: code 710, stay away at all costs. Ambassador Robert Fox overrides Kirk's wish to honor the request, and orders him to take the Enterprise into the system.

Kirk's orders are clear: establish diplomatic relations at all costs. He, Spock, Yeoman Tamura, and two guards, Galloway and Osborne, beam down; they are met by Mea 3 at the Division of Control, seat of the Eminian Union. There, Kirk learns that he is in grave danger. Mea takes him to the High Council, whose leader, Anan 7, rejects Kirk's diplomatic overture – because of the war. Anan reveals that Eminiar has been fighting a war with the third planet of the system, Vendikar, for almost 500 years. But despite a hit, right in the city, Kirk and his landing party can find no evidence of war. No explosions, no radiation, nothing that would suggest the damage he is assured is occurring.

Spock deduces the truth: the war is fought with computers. Casualties are calculated, and the victims have twenty-four hours to report to a disintegration station so their deaths may be recorded. This tidy solution preserves the civilization, despite the cost in lives. Kirk is incredulous that people would simply walk into disintegration machines; Anan assures him that his people have a high sense of duty. And then Anan tells Kirk that when the Enterprise entered orbit, it became a legitimate target, and it has been destroyed by a tricobalt satellite explosion. Like the victims on the surface, Kirk's crew has twenty-four hours to report for disintegration. Kirk and his party are imprisoned to ensure compliance.

Mea, herself declared a casualty, defends the system. She tells Kirk that if people don't report for disintegration, then Vendikar will be forced to launch real weapons, and Eminiar would be forced to retaliate, and both civilization and population would die.

The Eminians attempt trickery. Using a voice duplicator, Anan 7 tries to lure the crew to the surface. Scotty, suspicious, analyzes the message and discovers the duplicity. Meanwhile, on the surface, Spock employs trickery of his own: using a form of telepathy, he plants a suggestion in their jailer's mind. Thinking the Federation prisoners have escaped, he opens the door, and is quickly overpowered.

Moving about the Division of Control, the party encounters disintegration station 12, and destroys it. In response, Anan 7 institutes a full search, and orders the planetary defense batteries to open fire on the orbiting starship.

Scotty's caution proves most fortunate; the shields are able to turn aside the sneak attack.

Kirk realizes the only way he can save his ship and his crew is to put a stop to the fighting. To this end, he inveigles help from Mea 3. Meanwhile, Ambassador Fox attempts to salvage the situation. He contacts the planet, offering to have the ship lower its shields and to beam down personally to discuss the matter; Anan apparently agrees. However, this is a trick to enable the Eminians to destroy the ship and meet the terms of their treaty with Vendikar. Fortunately, Scott, with Dr. McCoy's support, bluntly refuses Fox's order to have the ship stand down. He notes that the landing party is obviously being held prisoner, and the ship was just fired on without provocation. Fox threatens to have Scott court-martialed for insubordination and proceeds to the planet with his aide alone.

Anan retreats to his office to prepare. Kirk, hidden there, confronts him, demanding to speak with his ship. Anan is more interested in saving his world, and refuses to yield. But finally, Anan tells Kirk where the communicators can be found; Kirk, correctly suspecting trickery pushes Anan into the corridor ahead of him. But it is no good; the guards overpower him after a brief struggle.

Fox beams to the surface with his attache; they are escorted – but not to the council chamber. Instead, Anan and his guards herd them to a disintegration station. Fortunately for the ambassador, Spock learns he has beamed down, and effects a rescue, destroying disintegration station 11 in the process. After the rescue, Fox admits that he has been dangerously mistaken about the situation and offers to help in the fighting.

With Kirk held in the council chamber, he learns that Eminiar is falling behind its quotas, and Vendikar accuses it of violating the treaty. Anan pleads with Kirk; if his crew doesn't report for disintegration, the civilizations on Eminiar and Vendikar will be destroyed in the very real war that will erupt. Kirk is unmoved. Anan opens a channel to the ship; Kirk takes advantage of the opportunity to order implementation of General Order 24 in two hours. Anan threatens the hostages' lives if the crew does not report immediately. Kirk informs Anan that his threats are academic, since in two hours, the Enterprise will destroy Eminiar.

Anan is at his wits' end; helpless, he faces certain abrogation of his planet's treaty responsibilities. Chance favors Kirk, who manages to overpower the guards and the council. Then, Kirk tells Anan his plan: to save his crew, he plans to end the war. To do so, he destroys the war computers. Those of Vendikar will assume Eminiar has broken the treaty, and will plan for real war. The next attacks, by both sides, will be very real. Or, they could change five hundred years of theoretical fighting, and make peace instead. Kirk tells Anan that if they contact Vendikar, they will quickly realize that they are just as horrified at the prospect of real war. Anan remembers that the communication link with Vendikar is still in existence, though unused for centuries. There might be a chance to save both planets if they put it to use. Fox offers to serve as a mediator between Eminiar and Vendikar, and Kirk leaves him behind to negotiate the peace.

Captain's log, stardate 3192.1.
The Enterprise is en route to star cluster NGC 321. Objective, to open diplomatic relations with the civilizations known to be there. We have sent a message to Eminiar VII, principal planet of the star cluster, informing them of our friendly intentions. We are awaiting an answer. (episode and fotonovel)

Captain's log, stardate 3192.5.
Now in standard orbit around planet Eminiar VII. My orders are clear. We must establish diplomatic relations at all costs. Preparing to beam down to the planet's surface. (fotonovel)

Captain's log, delayed.
The Enterprise, in orbit about Eminiar VII, has been declared a casualty of an incredible war fought by computers. I and my landing party, though apparently not included as casualties aboard the Enterprise, are confined on the planet's surface, awaiting … what? (episode and fotonovel)

Ship's Log, stardate 3193.0. Chief Engineer Scott recording.
The Captain and First Officer are overdue and missing on the surface of Eminiar VII. I have taken standard precautionary measures while we continue our attempts to locate them. (episode and fotonovel)

Collector's edition VHS release with "The Devil in the Dark".

Damon Knight's short story "Dulcie and Decorum" (1955) also describes a society in which warfare is carried out via computers and in which humans voluntarily go to their deaths. 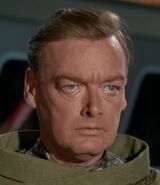 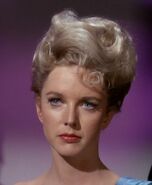 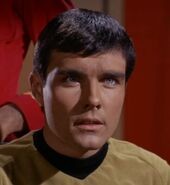 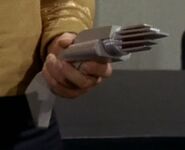 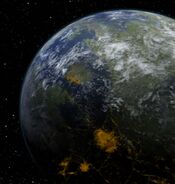