A Time to Be Born

A Time to Be Born

The site of one of the Dominion War's fiercest battles, the Rashanar Sector now contains a vast interstellar graveyard littered with the lifeless hulks of hundreds of devastated starships. The explosive destruction of so many varied warp drives has severely distorted the space-time continuum in this region, resulting in dangerous unleashed energies and bizarre gravitational anomalies.

The Enterprise has been assigned to patrol the perimeter of the danger zone, while other vessels carry out the difficult and highly hazardous task of retrieving the bodies of the dead from the wrecked warships.

To some alien races, the former battleground is hallowed space. To others, including the rapacious Androssi, it is a scavenger's paradise, ripe for salvage. None expect this ship's graveyard to hold a deadly secret that will force the android Data to make a heart-wrenching decision about the path his life will take -- and that will endanger not only the Enterprise, but Picard's future in Starfleet.

Wesley Crusher has completed his training as a Traveler but has one task still to perform: gazing into the Pool of Prophecy. When he does so, he witnesses the Enterprise being destroyed.

The Enterprise has been assigned to the site of the Battle of Rashanar, a conflict during the Dominion War which left no survivors on either side and has resulted in some curious new laws of physics. Captain Jill Leeden of the USS Juno, in charge of Starfleet operations in the sector, warns them of the dangers of scavengers in the area and that the place is "haunted".

The Enterprise crew get an early sign of the danger of scavengers when a group of Androssi steal the captain's yacht, the Calypso. They are also bothered by the presence of the Ontailians, a Federation member who joined in the latter stages of the war and who seem to have their own agenda for being there.

The Enterprise witnesses the destruction of an Ontailian vessel by an antimatter asteroid, only to learn the vessel was out of the area undergoing repairs at the time. They then see the Ontailians destroy an Androssi vessel that had tried to surrender. Data and La Forge, exploring in the shuttlecraft Hudson see two identical Calypsos before their shuttle is disabled. The Enterprise finds the wreckage of one Calypso and recover La Forge and the Hudson but there is no sign of Data.

Picard is court martialed for his part in the tragedy and, despite a defense from Admiral Nechayev, found guilty of negligence and placed in the care of Starfleet Medical Mental Health. Wesley, who has been posing as Nechayev's aide Ensign Brewster, approaches Beverly and tells her he is there to prevent the destruction of the Enterprise. 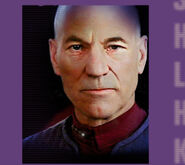