A Time to Die

A Time to Die

From the back cover: It was supposed to be a mission of mercy, until the unthinkable occurred: the destruction of the U.S.S. Juno, killing all hands on board. Starfleet Command has unjustly assessed the actions of Captain Picard and the Enterprise crew during that fateful assignment to the Rashanar Battle Site -- the sector that saw one of the fiercest conflicts of the Dominion War, and which is now a hazardous interstellar graveyard filled with hundreds of devastated starships. While the court-ordered medical evaluation that relieved Picard of command is ongoing, there is growing speculation that his illustrious career may be coming to an end.

To clear his former commander, acting captain William Riker and a demoralized skeleton crew agree to conduct a covert operation, and must venture the Starship Enterprise back into Rashanar to track down a mythical menace -- one that may already be responsible for the annihilation of countless fully armed starships. Unbridled hostility and the promise of death lurk at every turn, but they could never imagine that their only chance of survival may lie in the unexpected return of a long-absent friend....

Wesley reveals his presence to Commodore Korgan and Counsellor Cabot and persuades them to help Picard. When negotiations with the Ontailians break down, Admiral Nechayev decides to secretly sent the Enterprise back to Rashanar under Riker's command, with Picard, Cabot and Wesley (still disguised as Brewster) along as passengers.

Picard, Vale, Wesley and Cabot enter the battle site disguised as scavengers and Wesley is forced to reveal his identity to everyone to save them from Orions. It becomes clear that the mimic ship is the demon flyer of Ontailian mythology and they have been feeding it anti-matter as a tribute. It is also discovered that a gravity sink at the center of the battle site is a rift to a universe of anti-matter; the mimic ship has been destroying ships to leech off their anti-matter and deliver it through the rift.

Picard's group are contacted by Androssi, who ask for their assistance in recovering one of their number, Fristan, from the Pakleds. Wesley inadvertently causes the destruction of the Pakled ship by luring the mimic ship to their location but manages to rescue Fristan.

Cabot offers to go with the Androssi instead of Fristan and persuades them to destroy the gravity sink while it is in the process of receiving a delivery. The explosion destroy the Androssi ship and Wesley rescues Cabot...only to have her promptly killed in an Orion attack.

Fristan persuades Wesley to transport him to the Enterprise, where he helps the Ontailians take over the vessel and use it as a lure for the mimic ship. La Forge manages to retake the vessel and Fristan falls to his death when gravity is abruptly restored. Wesley persuades Riker and Data to set the self-destruct while the mimic ship is copying the Enterprise, so it replicates the destruct sequence (knowing the real Enterprise will be saved by the power drain). Wesley then completes the job by setting the fake Enterprise to overload.

With the mimic ship destroyed, the Ontailians elect to remain in the Federation on condition events are not made public and Picard is restored to command. Wesley is welcomed back into the fold by the Traveler and selects Korgan as his apprentice. 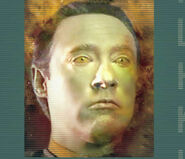