On the cusp of their epic battle with Shinzon, many of Captain Jean-Luc Picard's longtime crew were heading for new assignments and new challenges. Among the changes were William Riker's promotion to captain and his new command, Riker's marriage to Counselor Deanna Troi, and Doctor Beverly Crusher's new career at Starfleet Medical. But the story of what set them on a path away from the starship Enterprise has never been told.

At the height of the Dominion War and unknown to all save those in the highest levels of command, the Federation secretly armed the neutral planet Tezwa with devastating weapons—part of a contingency plan against the Dominion if the front lines collapsed. But Tezwa also lies near the border of the Klingon Empire… making the Federation's covert strategy in direct violation of their fragile peace treaties, and creating the potential threat of scandal and all-out war.

Now Tezwa's power-hungry prime minister is all too eager to flex his newfound military muscle, menacing a nearby Klingon border world. Sent on an urgent diplomatic mission, Captain Picard and the Enterprise crew are caught in the crossfire as the crisis quickly escalates. With time running out and billions of lives at stake, only one man can avert the looming disaster—Ambassador Worf, who must choose between his oath to the Federation and his loyalty to Martok, Chancellor of the Klingon Empire…

On Tezwa, Prime Minister Kinchawn secretly listens in on communications between his deputy Prime Minister Bilok and Koll Azernal, the Zakdorn chief of staff to the Federation president. The two of them have been hatching secret plans involving the Klingons and Bilok assures Azernal that Kinchawn is powerless to go to war. If the plan works, Bilok will be able to overthrow Kinchawn and gain control the Tezwan Assembly. He wants Azernal to guarantee that they will be admitted into the Federation. Azernal demands that Tezwa first remove the nadion-pulse cannons that Kinchawn has activated around the planet.

While at a formal state dinner, Federation President Min Zife is informed by Azernal that Tezwa has declared sovereignty over the Klingon border colony of QiV'ol. Since the Federation violated the Khitomer Accords by surreptitiously giving the pulse cannons to Tezwa as part of a defense strategy during the Dominion War, in order to avoid war with the Klingons, their existence must be hidden at any cost. Azernul suggests sending the Enterprise backed by Klingon ships as a show of force. Captain Jean-Luc Picard is ordered to go on the diplomatic mission to get Tezwa to withdraw and formally apologize to the Klingons.

Picard, Counselor Troi, and the Commander of the Klingon task force Captain Logaar beam down to the Assembly Forum. Kinchawn and the majority of the Assembly oppose Bilok's motion and refuse to apologize and order the arrest of their visitors. Logaar resists and is vaporized in response. Kinchawn orders the attack on the fleet and the pulse cannons fire severely damaging the Enterprise and destroying several of the Klingon ships in the initial volley. In retaliation, the Klingons have destroyed all of Tezwa's surface military bases and spaceports from orbit, killing millions of its citizens. The Enterprise is able to rescue Picard and Troi and escape while towing the IKS Taj—the only surviving Klingon ship. Six thousand Klingon warriors died in the attack.

Commander William T. Riker takes a damage team over to the Taj where there is only one survivor, its Captain, Vekma, whom Riker recognizes from when he briefly served on the IKS Pagh. She is furious with Riker for not allowing her to die in battle and curses him with her last breath before she dies. On the Enterprise, Lieutenant Commanders Geordi La Forge and Data have analyzed data from the attack and discovered the location of the nadion-pulse cannon firebases. Based on their design, they conclude that the pulse cannons come from Starfleet prototype weapons develop several years earlier for possible defense against the Borg. The Enterprise is soon sent back to Tezwa leading a fleet of Klingon ships to back them up.

President Zife along with Admirals Janeway, Nechayev, and Ross give Picard a call and the President directly orders him to destroy the pulse cannons by using "any means, any tactics, any force of arms required." Picard mentions the intelligence on the pulse cannons, but Ross and Nechayev vehemently deny any knowledge of their existence or Federation aid in their construction.

Picard informs his senior officers of their mission and they conclude that while the Enterprise would be unable to penetrate the firebase's defenses, small tactical teams might be able to take over the guns, disable the Tezwan fleet, and then destroy them all before the Klingons have a chance to land troops on the planet. Riker reveals that all Klingon ships can be controlled remotely through special security override codes by the Klingon High Command. Riker will worry about the destruction of the firebases while Picard will attempt to get the codes.

In an attempt to steal the Klingon fleet command codes, Worf first goes to the Federation Embassy on Qo'noS and gains access to the secret sub-basement which he was told about by family friend Lorgh, a member of Imperial Intelligence. After stunning the guard, he meets Commander Vasily Zeitsev whom he believes to be the real head of Starfleet Intelligence on Qo'noS. In reality, Zeitsev is a high ranking member of Section 31. After Worf informs him of his plan, Zeitsev tells him the location of the 12 computer terminals in the Great Hall which have access to Fleet Command and has a package delivered to Worf containing cutting edge espionage technologies to aid him in his quest.

Worf heads to the Great Hall to find Martok and makes a phony offer on behalf of the Federation in order to gain access to the Chancellor's office. He does find the hidden computer terminal, but it requires a retina scan as well as personal access codes which Worf is unwilling to force out of Martok.

On the Enterprise, Riker prepares six tactical strike teams to infiltrate the firebases and take over and eventually destroy the pulse cannons. The teams transport over to the IKS Taj and then Lieutenant Kell Perim remote pilots the Taj into Tezwan space. The strike teams are able to transport into the atmosphere and begin parachuting to the surface just as the Taj is being destroyed by the pulse cannons. The teams have just over two hours to get to their respective firebases before the Klingon fleet arrives.

Due to a blizzard in the Solasook Peninsula, Data's team found the main entrance to their firebase shut, but Data was able to send false sensor signals into the base and cause the personnel to evacuate. After setting off an avalanche preventing the workers from getting back in, they were easily able to take over the base. Christine Vale's underwater team in the Nokalana Sea initially has some trouble with a submarine blocking their entrance. They were eventually able to puncture the base causing the personnel to flee to the sub while they take over the pulse cannons.

Lieutenant Taurik's team travels through fire in the Linoka Forest, but is able to capture their base while downloading encrypted computer files. Jim Peart's team in the Kolidos Desert finds the base surrounded by Tezwan military troops, but is able to capture a hovercraft, destroy the firebase, and escape in a shuttle designed for evacuations.

La Forge's team encounters difficulty right away when Wathiongo's parachute catches on the rocks of Mount Ranakar and he crashes to the ground fatally wounded. The team barely manages to climb the mountain in time, but they are able to find an emergency exit to enter the base and fulfill their mission.

Riker's team has extreme difficulty traveling through the Mokana Basin; Lieutenant Barnes is injured by a swamp monster and Riker is bitten by a poisonous insect, eventually causing him to lose consciousness. But Master Chief Petty Officer Razka is able to lead them through the jungle, force the swamp monster away, and defeat all of the guards at the firebase. After setting the explosives, Tierney and Barnes are killed by a sniper and Razka is forced to transport Riker through the jungle alone.

Meanwhile, on Earth, Azernal hatches a plan to plant evidence that the Tholians were involved in giving the Tezwa the pulse cannons. He travels to McKinley Station in Earth orbit to order Nelino Quafina to make some unofficial shipments to Tezwa to plant the misleading evidence.

On Tezwa, Bilok calls a meeting of the top Gatni officials that he can trust and plans to overthrow Kinchawn and much of the rest of the Lacaam-dominated government.

Worf agrees to give Lorgh top secret information on a Breen ship captured by Starfleet Special Ops in exchange for detailed and damaging information on Councilor Kopek, a strong opponent of Martok. After breaking in to his quarters, Worf lures the Councilor back home, temporarily paralyzes him, and forces him to turn over his Fleet Command access password in exchange for the data pad of information (and his life). Worf is then able to access Fleet Command and obtain the command codes which he then transmits to the Enterprise.

On Tezwa, Kinchawn has met with General Gyero Minza and ordered him to begin killing Bilok and the other Gatni leaders. Elazol and Neelo are killed, but Bilok and the others survive the assassination attempts and prepare to storm into Kinchawn's office. By the time they arrive, Kinchawn and the other Lacaam'i leaders have fled the city. After discovering the tactical situation in orbit, Bilok immediately surrenders to Picard who has claimed Federation control over Tezwa. He promises Bilok that the Federation will aid in the rebuilding of Tezwa.

Meanwhile Kinchawn has begun to organize a resistance movement to take back Tezwa. General Minza will head the efforts, but will wait until Starfleet has arrived in force and begun to bring aid and rebuild Tezwa. Kinchawn believes that after attacks on softer civilian targets, the Federation will be certain to leave allowing the resistance to take back the government.

On the Enterprise, five of the tactical teams have returned safely but Riker's team is missing. The rest of his team has been killed and Riker has been kidnapped by the Tezwan resistance.

A Time to Kill is the seventh novel in the A Time to... miniseries. Its story is completed in A Time to Heal. 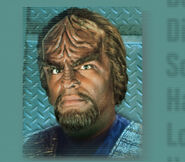