November 2385
Absent Enemies is the first eBook in the Star Trek: Titan series, and the first Star Trek book by author John Jackson Miller. The events of the story take place after Star Trek: The Fall.

A thrilling e-novella based on Star Trek: The Next Generation, following the dramatic events as chronicled in the New York Times bestselling story arc The Fall!

Newly promoted Admiral William Riker and the crew of the USS Titan are ordered to race to Garadius IV–a planet Riker knows all too well from an unsuccessful peace mission when he was still first officer of the USS Enterprise. But this time, he finds a mysterious new situation: one with the potential to imperil the entire Federation. One of the warring parties has simply vanished...

USS Titan is defending Zellman's Find, a populated asteroid rich in trilithium, from 3 Breen landers. They are joined by USS Aventine, and Captain Ezri Dax relays new orders for Admiral William T. Riker from Starfleet Command. He is to proceed to Garadius IV.

Shortly after the events of The Next Phase, the crew of the USS Enterprise-D is on Garadius IV. Captain Jean-Luc Picard, Commander William T. Riker and Counselor Deanna Troi are attempting to conduct peace negotiations between the Baladonian Lurians and the Ekorr peoples on the planet's single habitable island. Neither side has any respect for the other, each treating the other as pests and nuisances. The conflict has been going on for 90 years and the original negotiator sent to try to find peace was Spock. While unsuccessful he recommended the Federation keep returning to try to help.

While the diplomacy mission meets with little success, Lieutenant Commander Geordi La Forge repairs air and water filtration equipment on the island. This is the only reason the natives will allow the Federation in at all. Ultimately, the diplomacy mission fails. Neither side even willing to meet with the other. The Starfleet teams leave the planet quickly, leaving some equipment behind, but since both cultures are warp-capable the Prime Directive does not apply and no one wants to remain any longer than needed.

Admiral Riker obsesses with the mission going as efficiently as possible. His orders only forcing him to try diplomacy as long as it takes to complete repairs. His diplomatic team is limited to himself, Cmdr. Tuvok, Cmdr. Deanna Troi and an ensign linguist. Upon arrival all the Ekorr are gone and the crew of the Titan believe a genocide may have occured.

Riker puts the repair mission on hold to investigate the missing Ekorr. The diplomatic team are captured by the Baladonians and a Breen envoy, the Admiral and party will be turned over to the Breen as thanks for their help getting rid of the Ekorr. Tuvok is phased out of view and contact with the normal space-time. He finds out the Ekorr have phased themselves intentionally using the left equipment, and a stolen padd Geordi was using to make his report about his phasing incident 17 years earlier.

The Breen landers from Zellman's Find are joined by a Breen warship and Titan destroys the warship and 2 landers. The remaining lander hovers over the island too close to risk being fired on.

Riker and party are freed by a security team from Titan. He then reveals to both Baladonian and Ekorr that the Breen have played both sides to try to kill the other so that the Breen could claim the planet for themselves. The Breen's ruse revealed, they are forced to retreat from the planet. 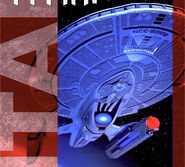