Action of the Tiger

Action of the Tiger

5973.5
"Action of the Tiger" was The Original Series installment contained within the second issue of Marvel Comics' Star Trek Unlimited comics. The story consisted of 22 pages, written by Dan Abnett and Ian Edginton. The art was penciled by Mark Buckingham and inked by Kev Sutherland, with Kevin Somers and Phil Felix credited as colorist and letterer, respectively. Editorial credits include Bob Harras as editor-in-chief, Bobbie Chase as editor and Polly Taylor as assistant editor.

In this story, James T. Kirk and Pavel Chekov are taken captive by Klingons on Starbase 6.

From solicitations
The Klingons take over Starbase Six! How did they get there? Is there a traitor at the summit? This looks like a job for Captain Kirk!

Captain's log, stardate 5973.5. I have been summoned to Starbase Six, where I and several other senior captains are to attend a high level briefing on the findings of the Federation's recent Klingon Neutral Zone policy summit. This is a formal affair, so I'll have to dust off my dress uniform and try to remember which set of cutlery to eat with first. Ordinarily I'd find this kind of politicking dull, but it's a perfect opportunity to meet up again with some old friends… and adversaries.

Kirk beamed over to the starbase with his security chief Pavel Chekov and Yeoman Ferro. Kirk met Commander Baines, who pointed out that the briefing would be led by Admiral Stone, who'd presided over Kirk's court martial in 2267. As they walked through corridors, Chekov thought he'd spotted a Klingon lurking in the shadow, but dismissed it as being overly nervous about the briefing.

Captain's log, supplemental. The admiral's thoroughness is formidable. We've been here five hours without a break. We're all waiting to see who drops first, him or us. Baines was incorrect earlier. I'm not bitter at Stone, but at the circumstances that led to my trial. Despite our history, I admire the man. He's a good officer, although he does tend to waffle. The other face from my past is Captain Ted Horner, my old friend and co-saboteur of the Kobayashi Maru no-win scenario which I duly won.

A group of Klingons barged into the conference room and took the attendees hostage. Korga announced to nearby starships that the starbase was under Klingon control. He ordered the Federation to cede Foladon IX colonies within six hours or hostages would be killed. Chekov questioned how a handful of Klingons could have overtaken the station, and Horner questioned why Klingons would make political demands. Stone distracted the Klingon guards while Kirk and Horner slipped into a ventilation duct en route to the starbase's power plants.

Captain's log – First Officer Spock reporting. Thirty minutes have elapsed since the Klingons seized control of Starbase Six. I am currently conferring with the acting captains of the Dauntless, the Eagle, the Republic and the Fermat. At present, emotion still holds sway over logic.

Emerging in a cargo bay, Kirk and Horner discovered Klingons loading the USS Bakker with Andorian credits – this was a robbery, and Baines was with them. With captured Klingon disruptors, Kirk and Horner confronted the robbers. Horner was killed and Kirk captured. Just before Korga killed Kirk, Chekov and Stone arrived in the nick of time and disintegrated the Klingon. The Bakker fled with the loot, but before it could get far, it was destroyed by Kor's IKS Klothos and two other D7-class battle cruisers, who had been altered by Spock.

Captain's log, stardate 5973.6. A crisis has been averted thanks to Mister Spock's deductive reasoning. Had this been war, the virtually omnipotent Organians, with whom both sides signed a peace treaty, would have interceded. Since they did not, he suspected Korga was not acting for the Klingon Empire. They seemed as eager to be rid of him as we were. 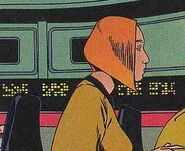 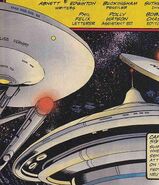 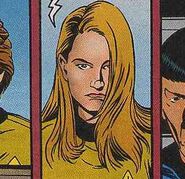 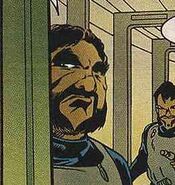 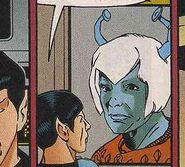 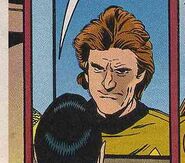