Klingons: Blood Will Tell No. 1

32, 22 of which are story
40 in the Klingon language edition

2267 & 2293
"Against Their Nature" is a Star Trek: The Original Series comic published by IDW Publishing in 2007, and is the first issue of the Klingons: Blood Will Tell mini-series, retelling the events of TOS episodes from a Klingon perspective. This story retells the events of "Errand of Mercy".

From solicitations: An unsteady peace breaks out into full-scale war after a Klingon cruiser is destroyed by the Federation starship Enterprise. How will the Klingons respond? Can you say "swift and blinding violence"... in Klingon?

On Qo'noS K'ahlynn enters her grandfather's office to find him deep in thought. Knowing what is on his mind she asks what there is to decide? The Klingon Empire is in need after the disaster on Praxis, they should be ready to strike out and take what they need to recover. But Chancellor Gorkon has offered an alternative course of action, and the outcome of the High Council's vote balances on Kahnrah's vote. He has been studying the chronicles of the House of Kahnrah for insights into contact with Humans.

As Kahnrah recounts to K'ahlynn, the House is an ancient one, dating back to the time of Kahless the Unforgettable. But in the present they are QuchHa' - while other Klingons might dub them "unhappy ones" the QuchHa' have the superior ambition bred into them by the genetic experiments that remade them, and rose to power in the High Council and fought at the front lines of the Empire's expansion into deep space. And like many QuchHa before them it was Kagh, a cousin of Kahnrah's, who met the enemy on the frontier, while commanding the IKS Vortha.

Commander's log entry 5373, IKS Vortha, Commander Kagh recording. As the Federation continues it's incursions into our space, we have increased our patrols into our more distant territories, to make certain the mongrel Humans seize no more of what is rightfully ours.

Negotiations continue between the Federation and the Klingon Empire, but these are merely a feint, a ruse to lull the Empire into docility while the Humans plot to steal our resources and starve us into extinction. But we will no be lulled, and will not be stolen from, and we will not be starved. We shall wrest control of the stars from the Earthers, as surely as we wrest the weapons from the dying clutches of our enemies.

Years earlier on the Vortha, one of Kagh's officer's reports long-range sensors have a contact; a Federation Constitution-class warship. Kagh anticipates the Federation's plan; To establish a beachhead on Organia. Despite being outgunned he orders the ship's logs be transmitted to the High Council and takes his ship into battle.

The Vortha strikes out at the Federation starship, but fails to inflict any substantial damage. Moment's later the starship locks it's phasers on the Klingons...

Kahnrah recalls the outrage in the High Council when the news of the vessel's destruction reached the homeworld. The Council looked to Kagh's kinsman for the response, and Kahnrah suggested a fleet be sent to Organia under command of Kor, son of Rynar, and so it was done.

Kor's first officer was Kahlor, another of the House of Kahnrah, and from who's accounts of the time Kahnrah had been researching: En route to Organia Kahlor ponders the motivation of the Federation, why send one ship to take the planet? Kor shrugs it off as Human over-confidence, and seems verified when the starship in orbit of Organia flees the planet when it detects the Klingons coming. Kor is disappointed at the lack of prospect for battle, and hopes the Federation will send reinforcements.

The Klingons beam down to the planet to find an unimpressive primitive culture. They get to work bringing some Klingon order to the civilization. The Klingons quickly establish their control over the passive locals, and Kor appoints Baroner, an unusually passionate Organian, as his liaison to the people.

Kahlor was uneasy about the appointment of Baroner, who he did not trust, and questioned his commander about the decision; Kor explains that if anyone of the Organians seemed likely to cause trouble it was Baroner, and so it made sense to keep a close eye on him.

Kahlor suggests that if Baroner, and a Vulcan trader that was brought in for questioning, were Federation spies the mind-sifter would uncover their mission. And the mind-sifter revealed nothing from the Vulcan.

Hours passed without event, until suddenly Kor was aroused by a massive explosion - the Klingons ammunition depot had been destroyed. After minimal interrogation the Organians pointed the finger at Baroner and the Vulcan, revealing them to be a Starfleet captain and science officer.

Before the Klingons can start a proper interrogation of the spies the two somehow escape. A furious Kor orders two-hundred Organians round up and shot in relation for their acts of terrorism - the depot, and freeing the prisoners. When Kahlor questions the honor of the plan Kor sights the Klingons no-tolerance policy to terrorism. Kahlor reluctantly carries out the order.

Above Organia the Federation fleet arrives ready for war. And on the surface Baroner and the Vulcan make an attempt on Kor. But before the Federation spies or the Klingons can fire their weapons become too hot to even hold, on the ships above the crews experience the same problem and on the planet the Organians arrive to explain. Simultaneously appearing on Organia, Qo'noS and Earth the Organian leader demands the two interstellar powers cease hostilities or their armed forces will be immobilised.

It turns out the Organians are much more than they seem, the two-hundred thought put to death are unharmed and the Klingons and Federation are forced to stop their fight. On Qo'nos the High Council is outraged by the peace treaty imposed on them. In the past Kahnrah suggests to his fellow council members that the Empire resort to guile if they cannot fight. And in the present K'ahlynn reacts in shock at the suggestion, of treachery and deceit! Kahnrah, his head in his hand, confirms espionage, and K'ahlynn asks how that played out. His response: "Not Ideally. What do you know about those festering vermin called tribbles?"

Flashback only
Antaak • Phlox
Referenced only
Gorkon • Kahless the Unforgettable 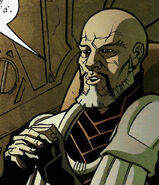 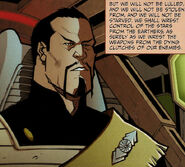 Kahlor, first officer of Kor, circa 2267 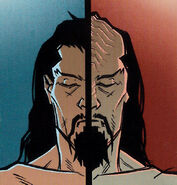