From solicitations: The Enterprise must face its most deadly confrontation with the Borg -- drones from the future, when the Collective believes it has achieved perfection!

The far off planet of Ploris has declined an invitation to join the United Federation of Planets. Unfortunately for Ploris, the Borg do not require an invitation for assimilation. 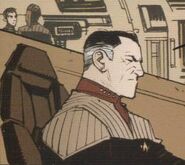 The destruction of the USS Maverick