From solicitations: Legendary writer/artist John Byrne, in his first-ever full Star Trek work, concludes this special series of one-shots in which the many alien races of the Star Trek universe get their due. The Romulan Empire has a new "ghost ship" that can't be detected by normal means. Will the Praetor use it as a weapon to thrust his people into full-blown war with the Federation or are his motives even more sinister? A tale of loyalty, betrayal and intrigue. 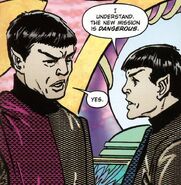