In this Spotlight issue looking at the race whose villainy is on display in the new Star Trek movie, the heroic and charismatic Commander Acastus seeks to parlay a lifetime of military service into an illustrious political career. However, on his final mission, he gets his first and possibly final taste of the poison chalice that is Romulan politics.

Cover by David Williams, with colors by Moose Baumann. 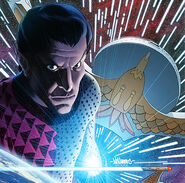 The story appears to be set before "Balance of Terror" and "Alien Spotlight: Romulans", where the "ghost ships" the Praetor orders into development at the conclusion of the story are shown to have entered service. The story also appears to show the young unpredictable Praetor present in the earlier "Alien Spotlight: Romulans" issue, who in that earlier issue only recently attained Praetorship after assassinating his father. Therefore this story likely takes place in early-2266 or late-2265, allowing some time for a rapid development program of the ghost ships, but also keeping the change in praetorship recent.