In the vast Star Trek universe, many diverse alien races abound, and now they finally get their due! Presenting a series of one-shots, each by a different creative team and featuring a different Star Trek alien race. In the debut issue, the spotlight shines on the Gorn, courtesy of the Klingons: Blood Will Tell team of Scott & David Tipton and artist David Messina. After their shuttlecraft crash-lands on an uncharted planet, Captain Terrell and Commander Chekov calculate that their odds of survival are somewhat decreased when they find themselves facing off against an army of Gorn warriors. Zach Howard (Star Trek: The Next Generation: The Space Between) provides covers for the entire series, and this issue's artist, David Messina, contributes a variant cover, too.

Captain's log stardate 7952.6. With our medical mission to the Federation observation outpost on Te Awamutu VII a success, we're preceding on schedule with Reliant. While I was happy to avoid the drudgery of a supply stop at Starbase 34, as well as give Commander Kyle the opportunity to log in some hours at the conn, I'm anxious to return to the Reliant. Too many hours without the feel of the decks beneath my feet, and I begin to grow uneasy. It'll be good to be home.

Captain Clark Terrell, Commander Pavel Chekov, Doctor Bianca Wilder and Crewmen Bates and Skiles are traveling in the shuttlecraft Kepler back to rendezvous with the USS Reliant after completing a medical mission on Te Awamutu VII. An escalating plasma wave blows out the power transfer conduits damaging the warp drive and communications forcing the crew to land the shuttle on a Class M planetoid.

The Gorn outpost on the planetoid had detected the shuttle crash and the outpost's commanding officer, General Rellk, dispatches a rescue party with Physician Thak. Rellk's intention is to repay the debt from Captain James T. Kirk sparring the life of a Gorn captain fifteen years earlier.

The crew of the Kepler start exploring the area around their crash site and are detecting approaching life signs on their tricorder. Unaware that the Gorn are using the planetoid as a training ground, Crewman Skiles accidentally trips one of the traps and is killed. Believing that the party is in danger, Captain Terrell leads the survivors to higher ground in an effort to gain a tactical advantage. There they spot an approaching patrol and fire their phasers to ward them off.

Since the Gorn translator only works at short distances, Thak circled around Terrell's party to get closer. Unfortunately he surprised Crewman Bates who shot the physician. Doctor Wilder quickly discovered the mistake when she found Thak's diagnostic scanner and cellular regenerator.

Upon hearing the report that the physician had been shot, and believing he had been killed, General Rellk ordered more troops to the area with orders to kill the Humans. Knowing that she could heal Thak, Doctor Wilder told the party to take the wounded Gorn back to their crashed shuttle. There she hooked up the Gorn equipment to her scanners and translators and was able to use it to revive him. Thak was then able to show the approaching Gorns that he was OK and to stop a possible massacre. Afterwards the crew was able to complete their efforts to set up a subspace rescue beacon. 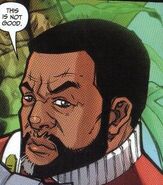 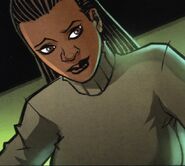