The Space Between No. 6

47993.3
"An Inconvenient Truth" is a Star Trek: The Next Generation comic, the sixth and final issue of IDW Publishing's The Space Between miniseries. The comic was written by David Tischman with art by Casey Maloney, and was initially released in July 2007, with a reprint in the omnibus of the series in September of the same year. The story, set in 2370, sees the USS Enterprise-D return to Earth, to try and uncover a Starfleet conspiracy that has been impacting the Enterprise since her mission began, as seen in previous issues of the series.

Jean-Luc Picard has always been an explorer, traveling the galaxy to seek out new life and new civilizations, but after seven years as captain of the Enterprise, he makes a startling discovery—scientific information from the Enterprise's mission logs has been used to develop deadly weapons systems. Is Starfleet involved? And if so, how high does the conspiracy go? Ignoring direct orders from his superiors, Picard launches an all-out offensive on the secret base where these weapons are stored. Picard is not about to see his mission perverted for military use and strategic control. Five single-issue stories come together in the explosive, action-filled conclusion of The Space Between.

On what appears to be the bridge of a Galaxy-class starship two men in a variation of Starfleet uniform discuss the situation at hand; sensors are down—the man looking into a scope on one of the consoles reports a reading of a thoron radiation burst "on the perimeter", the other man orders red alert. Before they can act any further Worf and William T. Riker beam in and overpower the men. Worf reports "Commander La Forge was successful in blinding their sensors". Having successfully infiltrated the location the Enterprise-D crewmen get to work.

Meanwhile, from his ready room on the Enterprise, Captain Jean-Luc Picard contacts Admiral Nechayev to report his recent discovery that the Enterprise's logs had been used "to forward a political agenda on several planets in the Alpha Quadrant... and perhaps beyond". Nechayev nonchalantly warns Picard to be careful throwing such accusations around and signs off. In her office in San Francisco she discusses the call with a shadowy figure; she promises to take care of Picard and the Enterprise.

Captain's personal log, stardate 47993.3
Six years ago, the Enterprise fought an alien conspiracy that threatened Starfleet and the Federation. Today we fight again, but this time I fear it is against our own - men and women who disregard the Prime Directive and seek to maintain their vision of galactic status quo. I no longer know who is friend or foe, but it ends here.

Elsewhere, Deanna Troi and Geordi La Forge make their way through Starfleet-style corridors to a room with a variation of a Galaxy-class's warp core. Geordi reports the thoron burst worked, allowing them to beam in undetected, and gets to work at a console. Deanna warns she senses something, shortly proved accurate when they are greeted by Data throwing a man in a variant uniform into another console.

Geordi informs Data he has successfully broken through the computer's security systems, but can find nothing. Data asks the computer to access personnel logs and schematics but is promptly informed neither exist. Data concludes they must have been misled, and Geordi follows that thought through; "It's a trap".

Meanwhile under moonlight in the gardens of Starfleet Academy Picard walks, and talks, with Mr Boothby. He asks Boothby about Nechayev; can she be trusted? Boothby is not sure; he tells Picard of whispered rumors of a secret group within Starfleet who "fight dirty to keep the Federation clean", and suggests such individuals might be at work on the Enterprise. Picard thanks Boothby for his time and apologizes for waking him; as the gardener walks away he warns Picard not to let the boogeyman get him.

A moment later Picard hears something, and drawing his phaser asks the shadows who is there; his response takes the form of a phaser beam, narrowly missing his chest. Picard tries to make an escape, running through the flower beds, but does not avoid the shot of the Tellarite assassin as a phaser beam pierces his torso. Fortunately at that moment a transporter beam pulls Picard out of danger from the weapon's impact.

Meanwhile on the bridge of the Enterprise, Doctor Crusher, in command of the ship, answers a hail from Admiral Adams, who wants to know what has brought the Enterprise back to Earth. She informs him the ship is currently under quarantine as half the crew, including the Captain, is suffering from an outbreak of Andorian measles. She tells the Admiral she'll have the Captain get back to him as soon as possible.

Elsewhere Worf and Will make their way through a series of corridors, but find themselves cut off by a force field. Unsure whether they have been detected they contact the other half of the away team. Data has Worf adjust his combadge frequency to make the com-line untraceable and guides Worf and Will to the transporter room the others are located in.

In the transporter room the team discuss their options, Geordi is trying to get the transporter online, but power has been re-routed from the section so he is having to charge the unit from his phaser, a tricky and time consuming operation. Will decides to implement plan B; Picard had hoped to reveal the facility and itss purpose to Starfleet authorities, but if the team could not transport him in they were to destroy the complex; Worf gets to work setting charges.

Meanwhile Picard rematerializes into another location, finding himself surrounded by a jumble of artifacts: images of Ferengi, an Iconian gateway and Borg and Xindi technology. He is greeted, at phaser point, by a bearded man, one of the Starfleet conspirators. The two men discuss their morality, Picard arguing the conspiracy undermines everything the Federation stands for, while the conspirator claims his people allow the Federation to exist, keeping the galaxy safe for Picard's ilk to continue peaceful exploration.

The leaders' discussion is cut short when the Enterprise away team arrives and orders the conspirator lower his phaser. The man's disadvantage is short lived as a contingent of his own men beam in to match Picard's numbers. The conspirator suggests they are at an impasse, but Picard disagrees and orders La Forge to detonate the charges. Geordi depresses the trigger... but nothing happens. The conspirator informs Picard the charges were neutralized moments after they were set, and then he beams away.

Left empty-handed the away team contact the Enterprise and transport home. Later, at a gathering in Ten Forward the crew discuss the recent events; Picard expressing his relief at Geordi's perfect timing when he was under fire in the Academy grounds earlier. Geordi's reaction is surprise, the transporter still being offline when Picard was rescued, prompting the question; who was it saved Picard? The team then notice a plate of Bularan canapes, not meant to be at the buffet table, adorned with a card, and a simple message "You're Welcome". Data ponders who might've sent it, to which Picard simply responds "a good friend".

Referenced only
Ferengi shuttle (as a schematic) 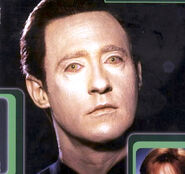 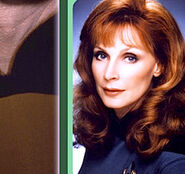 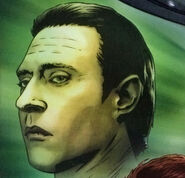 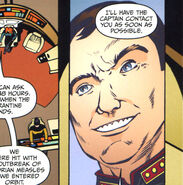 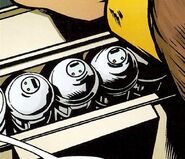 A case full of charges.