The Original Series
The Next Generation (Star Trek Unlimited) No. 7

49827.5
"An Infinite Jest" is the seventh issue of Marvel Comics's Star Trek Unlimited series, published in January 1998. This issue is the second issue of the series to feature a single feature-length story, and the first of the series to have a crossover interaction between The Original Series and The Next Generation. Previously, Issue 6 had a feature length story that omitted TOS from Unlimited for the first time (due to the Telepathy War crossover), while Unlimited, Issue 4 had a TOS and TNG tie-in, although the two series did not directly interact in the two stories in that issue.

Two starships, two crews – one adventure! Trelane and Q cause Kirk and Picard to change places!

First officer's log, stardate 49827.5 (October 30, 2371, William T. Riker recording).
Today sees the launch of the USS Enterprise-E of the new Sovereign-class. She's a fine craft, a credit to her name. Yet it's a time of pride tinged with regret. The Enterprise-D got us out of more scrapes than I care to recall. She went before her time on Veridian III. I think the captain took it harder than any of us, as if part of him died down there.

Captain's log , supplemental (recorded by James T. Kirk aboard the USS Enterprise-E).
We're in orbit around Salvation. Kang is holding back, waiting for word on his promised weapons technology. At present lying to a Klingon is the least of my worries.

Captain's log , supplemental (recorded by Jean-Luc Picard aboard the USS Enterprise).
Orbiting Salvation, I sense the final act of this surreal drama is finally about to be played out. Sensors indicate Gowron's ship is in pursuit and closing fast... I only hope we can resolve the so-called secret of Salvation in time! 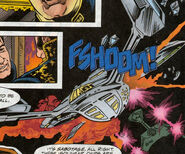