unknown
"An Unexpected Yesterday" is the 22nd and final regular issue of John Byrne's Star Trek: New Visions comic series. It was published in June 2018.

Kirk and his crew venture into the past, only to discover it is nothing like what their history books teach—no trace of the devastation of World War III and the Eugenics Wars. What can have caused such a divergence?

Unusual readings from the Guardian of Forever brought the USS Enterprise to Gateway's orbiting Science Station 187, where James T. Kirk, Spock and Leonard McCoy reunited with the ship's former A&A officer Carolyn Palamas. Analysis of scan data suggested that the Guardian reset itself, and even the Guardian could not explain the cause of strange temporal distortions. Spock adjusted their communicators to remain in contact with Palamas and McCoy, and then Kirk and Spock stepped through the portal to investigate.

They arrived in the northeastern United States in the early 21st century, but demonstrably not in their own universe. In this parallel universe, Earth looked peaceful, not at all ravaged by the 1990s Eugenics Wars and World War III as cited in their history books. They were then stunned by Gary Seven, who was reconnoitering the same area.

Seven brought them via transporter back to his office. Being from a different universe, he did not recognize Kirk or Spock, but they provided more than enough details to prove that they knew him. The Beta Twelve computer located an inter-dimensional portal within a small house, so they beamed over to search it. Kirk, Spock and Seven found a sophisticated device in the basement which channeled unrecognizable energies. Soon they were confronted by inventor Allen Rigby and a pair of Sub-Dimensional beings, who built the device. The beings assaulted the intruders, then turned on Rigby.

Meanwhile, the Enterprise struggled against waves of erratic temporal disruptions that threatened to destroy the science station. Having lost contact with Kirk, Montgomery Scott and Palamas traveled through the portal to aid the landing party, but emerged instead on irradiated ruins from their own 21st century. As planet Gateway began to shake apart from temporal stresses, the Enterprise was unable to retrieve McCoy and Uhura, so they also traveled through the portal, locating Scott and a wounded Palamas.

After Spock subdued the beings with a Vulcan nerve pinch, he attempted a mind meld, but was overwhelmed by images of collapsing parallel universes. The inter-dimensional portal threatened all existence, and Rigby sacrificed his life to shut it down. It disappeared, and shortly afterward reality returned to normal. The Enterprise crew were returned to Gateway, and Palamas was treated in sickbay. With all of the criss-crossed timelines, McCoy wondered aloud how they would know if they had been returned to the right one. 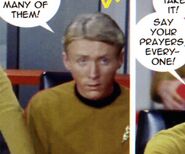 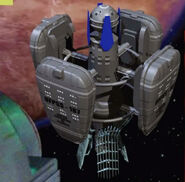