Andrea was a female android constructed by Roger Korby on Exo III in the 2260s decade.

In 2261, Korby led an expedition to Exo III, but their survey ship crashed, killing everyone aboard except Korby. He was found by the indigenous android Ruk who showed him android-producing equipment several miles below the surface.

Prior to 2266, Korby was able to create android duplicates of his fellow expedition members.

In 2266, when the USS Enterprise orbited Exo III, Korby's fiancée Christine Chapel accused Andrea of being a "mechanical geisha". Although programmed not to have human emotions, the Andrea duplicate learned to feel them, though she had difficulty particularly with the emotion of love. Korby eventually disintegrated himself and Andrea with a phaser. (TOS episode & Star Trek 11 novelization: What Are Little Girls Made Of?)

Historical research done on Dr. Korby's expedition by Commander Spock revealed that Andrea's appearance was based on an expedition member, Andrea Milton, who did not survive the crash of Dr Korby's vessel.

At Stardate 4991.3 Captain James T. Kirk and Doctor Leonard McCoy during shore leave on Wrigley's Pleasure Planet encountered another Andrea android working as a hostess there. When confronting Wrigley, the owner of the planet, it was revealed that he had purchased 16 Andrea units from Kirk's 'brother' (Harry Mudd pretending to be related to Kirk after an earlier incident left Mudd with Kirk's appearance). Mudd claimed to have sold 5,000 Andrea androids to worlds throughout the galaxy. Mudd was done in by rebellious Ruk androids. When Spock shut down the Exo III master computers, it deactivated all of the Andrea units. (TOS - New Visions comic: "The Survival Equation")

With Chapel and Korby. 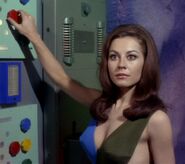 Five Andrea units
Add a photo to this gallery

Retrieved from "https://memory-beta.fandom.com/wiki/Andrea?oldid=638192"
Community content is available under CC-BY-SA unless otherwise noted.