4010.6
"Anything But Alone" is the second of five TOS manga stories from the 2006 anthology Shinsei Shinsei, published by TokyoPop, written by Joshua Ortega and drawn by Gregory Giovanni Johnson. Beaming down to Ximega II, the Enterprise's landing party were welcomed, yet something was amiss. The colonists seemed unable to remember details of their arrival on the planet, serious wounds healed in seconds, and there were no children anywhere.

Captain's Log, Stardate 4010.6.
After delivering much-needed medical supplies to Makus III, the Enterprise has set a new course — Sector 061. A largely unexplored region of space near the Alexisian System.

Lt. Uhura picks up a message on a frequency once used by Ximegans before their world was destroyed more than 100 years ago. Following the message, Kirk, Spock and McCoy beam down. Peculiarities abound. Charteil greets them almost immediately, yet is unaware of the transmission that brought them there, so how did she anticipate their arrival? No remnants of spacecraft are detected, so how did the colony arrive on the planet? Endarch cuts himself badly, yet his wound heals in seconds. No children are visible, so how did the colony survive the past 100 years? Staying the night, the landing party resolves to answer those questions.

In the morning, Lin confesses to having sent the signal. Spock detects nanotechnology and realizes the truth: that the colony is made up entirely of nano-machines. "Were one to develop a technology capable of storing consciousness as electronic data, it is theoretically possible to combine it with nano-scale engines to generate an entire colony of human beings." Dr. Prekraft and his wife Lin had saved the colonists' memories and consciousness into a probe, then replicated them on Ximega II. But then solar flares devastated the simulations, and electromagnetic radiation erased all data on the probe. After a virus killed Lin, Prekraft lost all hope. Using the nano-machines, he recreated the colony from memory, maintaining everyone's personalities, and had forgotten everyone was an illusion until the Enterprise visited. He strikes back at the landing party, creating monsters to attack them. Then the memory of Lin intercedes, comforting him, telling him the people from the Enterprise are real and can help him through his pain. The colony dissolves. Later, while recuperating in sickbay, Prekraft thanks the captain for his help.

Colonies were recreated in: 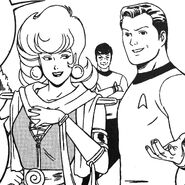 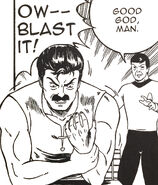 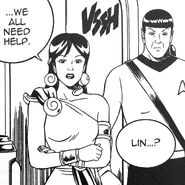 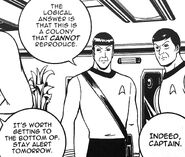 Part of the mystery. 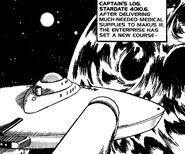