Anzar was a male humanoid born in the 23rd century. He was a criminal who ransomed the biomagnetic recordings of the planet Styra.

Anzar was a trader and second-rate entertainer. He played the budupaphone and performed comedy on backwater planets along with his sister Allura. Authorities often suspected him of criminal activity but could never prove anything.

In 2267, at his request, Allura stole the biomagnetic recording of the planet Styra out of a safe aboard the USS Enterprise. Anzar's spacecraft retrieved her. He then held the planet and its population for a ransom of 100 million in credits or precious jewels and rare metals. Azura and Allura hid out in a cave on Lurota with at least six armed security guards. James T. Kirk and Spock met with him to negotiate for the planet's release, and was tricked twice with a Trojan horse ploy. Anzar disliked dogs and surrendered when accosted by a reconstituted schnauzer.

He became a raving lunatic afterward. Treatments were expected to follow, including chemotherapy, psychoprofiles and psychological reconditioning. (TOS comic: "The Hijacked Planet") 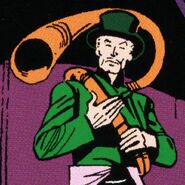 Cover appearance.
Add a photo to this gallery
Retrieved from "https://memory-beta.fandom.com/wiki/Anzar?oldid=638080"
Community content is available under CC-BY-SA unless otherwise noted.