President of the United Federation of Planets

Attorney General of the United Federation of Planets
Areel Shaw was a Human female who served in Starfleet as a Lieutenant and JAG officer before settling into private practice as a lawyer.

In 2262, Shaw and James T. Kirk had a brief romance. Five years later, Lieutenant Shaw arrived at Starbase 11 and was assigned as the prosecutor in the court martial hearing that was convened against Kirk, following the alleged death of Benjamin Finney. Despite her previous personal involvement with Captain Kirk, Shaw carried out her obligations fully and impartially, and presented a strong case against Kirk. Kirk was cleared when Commander Spock was able to reveal that Finney was still alive and trying to frame the captain. (TOS episode: "Court Martial")

Startrek.com indicates that Shaw and Kirk's relationship was in 2263 and thus only a four year difference between that event and the Finney case.

Following the completion of the court martial, Shaw struck a friendship with Kirk's defense attorney, Samuel Cogley. (TOS comics: "The First Thing We Do...", "... Let's Kill All the Lawyers!", "Trial and Error!")

When the USS Enterprise finished its five-year mission, Shaw had been promoted to Attorney General of the United Federation of Planets, greeting Kirk aboard the USS Theseus. Growing increasingly concerned of the threat posed by the Originalist faction, Shaw tried to convinced Kirk to run for the position of President of the United Federation of Planets in the upcoming election before the IKS Gauntlet arrived, Kirk surrendering himself to its crew as means of keeping the peace. Furious, Shaw tried to convince Admiral Koraxi to no avail. Shaw was soon approached by Spock and Leonard McCoy with evidence of Koraxi being an Originalist who had allowed the Klingons in. Taking command of the fleet, Shaw rescued Kirk before the Klingons fled. When the Enterprise took its leave, Kirk suggested that Shaw run for the presidency. (TOS comics: "Year Five, Issue 13", "Year Five, Issue 14")

Still worried about the Originalists, Shaw asked Kirk to perform a "threat assessment" of their campaign strength and candidate on Andoria. (TOS comic: "Year Five, Issue 15")

By the time that the Enterprise returned to Earth, Shaw, now an official candidate for the presidency was present for the crew's final debrief, clashing with her opponent Renei with her biases against non-Federation races before the Tholian Assembly, manipulated by Aegis attacked. When Renei proposed a nuclear holocaust to drive the Tholians off, Shaw and McCoy managed to argue against this long enough for the Enterprise to find a solution. In the aftermath, Shaw engaged in one last debate against Renei. (TOS comics: "Year Five, Issue 22", "Year Five, Issue 24")

Shaw subsequently emerged victorious, being elected as President of the United Federation of Planets. As a personal favour to Kirk, she allowed him to oversee the development of the Enterprise colony on Lloyd-Zeta 9, though just long enough for the colony to become self-sustaining. (TOS - Year Five - Experienced in Loss comic: "Issue 25")

By 2287, Shaw and Cogley were married and had established a joint legal practice together on Earth. In that year, Cogley and Shaw both defended Captain Kirk at a number of hearings at the Federation Council over his involvement with the Klingons and the Nasgul. (TOS comics: "The First Thing We Do...", "... Let's Kill All the Lawyers!", "Trial and Error!")

In 2293, Shaw attended Kirk's memorial service that was held on the grounds of Starfleet Academy. Also in attendance were former crewmembers of the USS Enterprise and some of his other old "acquaintances". (TOS - Crucible novel: The Fire and the Rose) 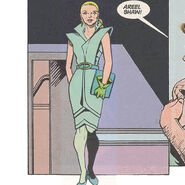 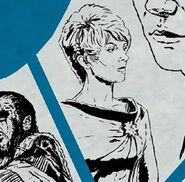