It is a new age of exploration, and the USS Enterprise is dispatched to "the Odyssean Pass", a region charted only by unmanned probes and believed to contain numerous inhabited worlds. Approaching a star system with two such planets, Captain Jean-Luc Picard and his crew find a massive alien vessel, drifting in interstellar space for decades. Sensors detect life aboard the derelict–aliens held in suspended animation. Thought to be an immense sleeper ship, the vessel actually is a weapon capable of destroying entire worlds...the final gambit in a war that has raged for generations across the nearby system. Captain Picard is now caught in the middle, of this conflict and attempts to mediate, as both sides want this doomsday weapon...which was sent from the future with the sole purpose of ending the interplanetary war before it even began!

The Enterprise is exploring the Odyssean Pass when they come along a derelict spaceship. An investigation becomes more complicated when they discover two crewmembers in suspended animation and that the ship has travelled in time, coming from over a century in the future only to be left drifting for ninety-four years when the crew failed to revive as scheduled.

It is revealed that the neighbouring star system plays host to two sentient races, the Raqilan of Henlona and the Golvonek of Urphrel. The ship is Raqilan and a Golvonek ship soon arrives to take custody of the ship and its crew. Picard gets permission for the Enterprise crew to revive the two crewmembers, Jodis and Bnari, who confirm that the ship, the Poklori gil dara or Armageddon's Arrow, was designed to prevent the conflict that would devastate both races by stopping it before massive environmental damage occurs to either world. He also reveals the Arrow is already being constructed in that time period.

Worf and Elfiki investigate the construction site, discovering that the inspiration for the Arrow came from a crashed version of the Doomsday machine, identifying it as a far more primitive version of the two previously encountered by the Federation. However, as they attempt to return to the Enterprise, they are taken into custody by the Raqilan, who set course for the completed Arrow. The Golvonek similarly turn on and capture an away team led by Chen and Crusher. However, Jodis and Bnari also get free, overpower the Golvonek and take control of their ship.

The Enterprise beams Worf and Elfiki back aboard when the Raqilan try to use them as hostages but the Arrow suddenly fires on both sides. Chen realizes Jodis and Bnari are double agents, who were ordered to destroy Henlona instead. In fact, they plan to use the Arrow to police both sides and enforce a ceasefire. However, another member of the cell has installed a computer programme which is forcing the Arrow to attack Henlona for real. Chen works with the pair to redirect the Arrow to crash into the construction site for its earlier self, but to avoid the programme redirecting it again Jodis and Bnari have to stay onboard while the Enterprise crew evacuate. Picard resolves to bring about a proper truce between the Raqilan and Golvonek before the Enterprise moves on. 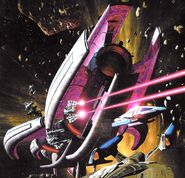