Captain's log, stardate: 8987.7.
We are proceeding at warp six to the planet Miraud upon being advised of an inexplicable attack... ...An attack upon a peaceful scientific Klingon outpost—apparently by a Reliant-class Federation starship. Word has reached us at approximately the same time it reached the Klingon Empire. Our hope now is to reach the planet before the Klingons... To try and find some evidence, some answers, before the Klingons can cover it up. They are... notoriously secretive. But there are some matters that the Klingons are being outspoken on. There were 127 Klingons on that science base. Men, women... ...children... and the Klingons, to put it mildly, are not happy. ...And for once, I can't say I blame them.

Searching the ruins of the science station, a Klingon with white skin finds a child's doll and weeps over it. In the Enterprise briefing room, Konom and Spock agree that the base was almost certainly not conducting weapons research. As the senior staff files out, Kirk asks McCoy, Scotty and Chekov to remain behind. He informs them that analysis of the punch served at Konom's bachelor party revealed that it contained scotch, Romulan ale and vodka. Pointing out that the brawl at the party caused injuries, including to himself, he tells the three men they will go dry for the next month and orders them to turn in all alcohol in their quarters to Sulu in his capacity as executive officer. As they leave, Kirk tells Chekov he wants to see Bearclaw.

Konom and Nancy Bryce discuss the attack on the base. Bryce is curious about the strange appearance of the white-skinned Klingon who sent the distress call. Konom speculates that he may be a failed genetic experiment. On Miraud, the Klingon with the doll, hiding behind a girder, sees an Andorian named Melchior and two other beings, Bendar and Grunt, approach another Klingon survivor trapped under the rubble. They free him, but Grunt tosses him into the air and the other two kill him in mid-flight with their guns. Bearclaw reports to Kirk's quarters, where he apologizes for Kirk's injury. Kirk tells him that neither he nor Konom will pursue charges against Bearclaw for assaulting an officer, but that he will be transferred to a smaller ship.

Melchior, Bendar and Grunt find the white-skinned Klingon, whom Grunt picks up by the leg. Terrified, he tells them his name is "Moron". As Grunt is about to throw him into the air, an Enterprise landing party consisting of Kirk, Konom, Bryce and three security guards appears and saves him. Melchior says the destruction is their work and that of the rest of the crew of the USS Renegade, commanded by Captain Zair. Their plan is to turn the Federation and the Klingons against each other. Kirk contacts Spock and warns him that the Enterprise may not be alone in space. Sulu's sensors show nothing, but suddenly photon torpedos are fired at the ship. The Renegade decloaks and beams aboard its three crewmembers, Moron and the Enterprise landing party. Sulu takes advantage of the Renegade's dropped shields to fire on the ship. The group is taken to "Captain Zair", whom Kirk is stunned to recognize as Phil Burroughs. Burroughs orders that they be put into environment suits.

The Enterprise bridge crew is stunned to see Kirk's party floating in front of the Renegade in environment suits, preventing the Enterprise from firing on the other ship. Beaming Kirk and the others aboard would require dropping shields. As the Renegade activates its cloaking device, Sulu picks it up on motion sensors but also detects another ship: a Klingon battle cruiser. The Klingons detect several lifeforms floating in space, two of whom are Klingon, and their commander, Kron, orders them beamed aboard. M'Ress picks up a transmission from the Klingon ship informing her that the Enterprise party is aboard, and Spock tells her to warn the Klingons that "they are about to witness an odd display." He orders Sulu to fire phasers at the last known whereabouts of the Renegade.

Captain's log, stardate 8988.9.
We have been beamed aboard a Klingon battle cruiser where the commander, Kron, is allowing me to communicate with my ship.

Spock tells Kirk that the phaser fire was ineffective and that the Renegade has probably left the area. Kron says Kirk's group is free to return to the Enterprise, although he would have killed them himself had he known that one of the Klingons was the "traitor" Konom. He demands that Kirk take Moron, whom he refers to as "this... thing", back to the Enterprise. When Bryce objects that Moron is one of Kron's people, Kron reveals that he is a "half-breed", adding, to Konom and Bryce's horror, "What else would you expect when a human and a Klingon mate... except a freak?" 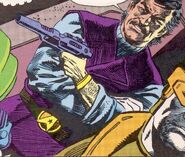 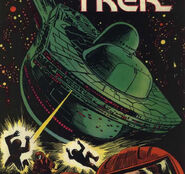 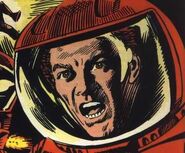 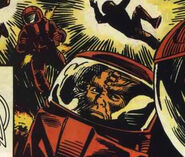 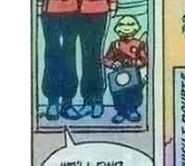 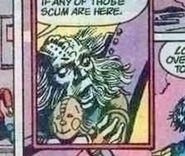 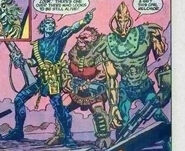 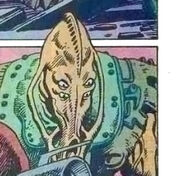