The Original Series No. 84

Captain Kirk first encountered Gary Seven on twentieth-century Earth. Now Seven, a time-traveling operative for unknown alien forces, makes a surprise visit to the USS Enterprise. Kirk is on an urgent mission to bring relief to a disaster-ravaged planet, but Seven has an agenda of his own -- and he's not above hijacking the Starship Enterprise and sending it on a perilous journey deep into the heart of the Romulan Empire.

Kirk must dare to trust Gary Seven once again, as he confronts the possibility that the enigmatic stranger may bring death and destruction to Kirk's own era.

Romulan Commander Dellas of the Tal Shiar witnesses the failed assassination attempt on the Federation president at the Khitomer conference, then herself assassinates Captain Spock.

After ensuring the success of the Apollo 11 moon landing, Gary Seven is alerted to a disruption of the timeline. He, Isis, and Roberta Lincoln transport themselves through time and space to 2269, the apparent divergence point, aboard the Enterprise.

The Enterprise, en route to deal with an environmental disaster threatening the Federation colony on Duwamish, intercepts Seven's transporter beam. He insists on Kirk's help in carrying out a vital mission within Romulan space, though he refuses to share any of the details. When Kirk refuses, Seven imbalances the starship's warp engines, creating a wormhole that delivers the vessel deep within the Empire. The ship soon comes under attack by a squadron led by Commander Motak of the Gladiator, and is forced to flee deeper into Romulan space. Sensors detect an uninhabited star system that apparently contains a cloaked planet and Kirk decides to investigate, fearing a secret Romulan base and an incredible Romulan technological advance. The Enterprise hides from the Gladiator within the cloaking field while Kirk, Sulu, and Chekov beam to the surface. Seven escapes from the brig and invites himself on the landing party. Kirk tries to have him returned to the Enterprise, but a force field blocks transporters and communications.

Seven finally shares minimal details of his mission—his contemporary in this area and region, Supervisor 146 (aka Septos), has been discovered and captured by Romulan forces, and plan to use their newfound advanced technology to alter the timeline. The team meets up with Septos' pet/partner, a large sentient feline named Osiris. While Sulu and Chekov create a diversion, Kirk, Seven, and Osiris slip inside the captured base, and Septos escapes from Dellas' intensive interrogation and reach the control center.

In orbit, Spock prepares to abandon the landing party and escape Romulan territory to safeguard the ship and crew, but Roberta uses her superior technology to seize control of the ship. Spock conducts a mind-meld so that both sides can trust each other and learns of his own future assassination, though he convinces Roberta to return control of the ship. The Enterprise departs the cloaking field, drawing the Gladiator away from the planet and ultimately disabling the battlecruiser by tying Roberta's interface cube into a torpedo's sensors. The ship then returns to the planet to rescue the landing party.

Kirk, Seven, and Osiris find Septos just as Dellas beams in and murders him, then Osiris. A firefight ensues, but Dellas wins out by overloading her disruptor and stunning them all. The paranoid Dellas sends her troops away, guarding Kirk and Seven herself until using the transporter to travel to 2293 to kill Spock. Seven sets the base's autodestruct before following her into the future, leaving Kirk to hold off the rest of the Romulan troops. He narrowly succeeds and returns to 2269 moments before the explosion, but Isis, aboard the Enterprise, reconfigures the transporter to rescue everyone from the planet. The base is destroyed, keeping its advanced technology out of Romulan hands, and Spock mind-melds with Dellas and her technologist, Vithrok, to remove all knowledge of the same. Seven repeats his wormhole trick to deliver the Enterprise to Duwamish several days in the past, allowing the crew to complete their vital mission, before returning himself, Isis, and Roberta to 20th century Earth.

In addition to merely mentioning TV series and films from the 20th Century, this novel also references several in terms of indicating that they could have analogous events within the Star Trek universe: 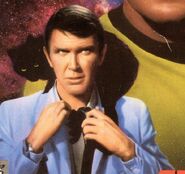 Retrieved from "https://memory-beta.fandom.com/wiki/Assignment:_Eternity?oldid=764913"
Community content is available under CC-BY-SA unless otherwise noted.