Star Trek: The Next Generation—Doctor Who No. 6

2368
Assimilation², Issue 6 is the untitled sixth issue of Assimilation², the Star Trek: The Next Generation—Doctor Who crossover comic series from IDW Publishing in 2012. The story is by Scott & David Tipton, and the art is by Gordon Purcell and J.K. Woodward.

An unexpected alliance is formed, providing a glimmer of hope in surviving the CyberBorg onslaught!

A USS Enterprise away team beams to Tau Lee, a planetoid where they can safely meet with a surviving fragment of the Borg Collective not yet under the influence of the Cybermen. Jean-Luc Picard meets the Conduit, a Borg who once was a friend of William T. Riker, Captain Marcus Bertrand of the USS Potemkin, before being assimilated at Delta IV.

The Conduit explains how the Cybermen will be able to annihilate the Borg, and states that an alliance with the Federation is required to ensure their survival, which is all the assurance he can give that the Borg will not turn on them. As a sign of good faith, however, his companions remove any components on him that are capable of assimilation. He then suggests an effective battle strategy, which requires engaging them in person.

The Doctor points out that Cybermen are susceptible to gold, but they'd need more than the starship could replicate. The Enterprise returns to Naia VII, where it visited prior to the Borg's assault on Delta IV. Picard beams down with the Doctor and Counselor Deanna Troi. They meet with Seelos, leader of the Dai-ai, to ask for the gold they need. Seelos is reluctant, as the loss of that much gold would severely affect his planet's economy, but the Doctor convinces him.

Next, they need to recover a backup of the Borg Executive Library in order to restore their collective consciousness. When the Doctor asks if they know of any time in history where a Borg ship could be found, William T. Riker cites the Battle of Wolf 359.

Aboard the TARDIS, the Doctor, Amy Pond and Rory Williams use time travel to materialize within the historic Borg cube. Using a tricorder for guidance, they begin searching for the library, ignored by Borg as irrelevant. But then they round a corner and come face to face with Locutus.

the galaxy
Referenced only
Paertes Nebula

Cover B by Emanuela Lapacchino and Fabio Mantovani 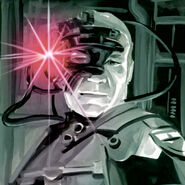