Star Trek: The Next Generation—Doctor Who No. 7

2367 (Battle of Wolf 359), 2368 (Cybermen invasion)
Assimilation², Issue 7 is the untitled penultimate issue of Assimilation², the Star Trek: The Next Generation—Doctor Who crossover comic miniseries from IDW Publishing in 2012. The story is by Scott & David Tipton, and the art is by Gordon Purcell and J.K. Woodward.

The Doctor and his companions must travel into the past and navigate through one of the Federation's most crushing defeats in order to prevent an even worse fate in the present!

Having slipped aboard the Borg cube invading Federation space just prior to the Battle of Wolf 359 in 2367, The Doctor, Amy Pond and Rory Williams have blundered into Locutus. Luckily, he ignores them, as do the rest of the Borg drones, considering intruders irrelevant. The Doctor locates the appropriate computer terminal and carefully saves a copy of the Borg Executive Library into a tricorder, trying not to draw attention. Amy was told that thousands die in this battle, and as it begins, Amy urges The Doctor to do something. However, he explains that the engagement is a fixed point in time and cannot be altered.

The three return to the TARDIS and materialize aboard the holodeck of the USS Enterprise-D in 2368. Their mission was a success, but Geordi La Forge admits that even with Conduit's help to boost warp engine efficiency, they have no way of catching up to the Cyberman fleet before it reaches the Borg homeworld. The Doctor proposes to take a small strike team in the TARDIS to sabotage the lead Cyber-ship, delaying it long enough for the Enterprise to catch up, and Picard agrees. William T. Riker objects to Picard leading the team, but the captain has decided not to risk any more people than necessary, and the choice to ally with the Borg was his. The Doctor asks his companions to stay behind, but they won't hear of it.

Worf joins Data, three security officers, Picard, The Doctor, Amy and Rory in the TARDIS, and they silently materialize aboard the Cyber-ship. Within seconds, an intruder alert blares, and the team splits up, with Worf's group heading for engineering and Picard's group to the bridge. Each faces various confrontations and challenges aboard the vessel, and each finds a large number of Cybermen at their intended destination.

Cover B by Emanuela Lapacchino and Fabio Mantovani. 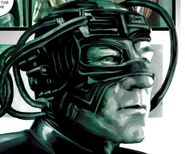