Geordi LaForge and his fellow cadets are headed to Atlantis station, the underwater research base located near a volcano in the Atlantic Ocean. Up until now Geordi has spent most of his life in space with his Starfleet officer parents and he is more than ready to explore this strange, new world deep underwater.

The first stop for the cadets is the above-ground complex on Isla del Fuego, where the students barely escape a small volcanic eruption. They finally arrive at the underwater station shaken and fighting among themselves, but determined to carry out their assignments.

Then suddenly an earthquake rocks the station and the cadets are trapped in their lab with tempers running high. Now, as debris blocks their path back to the aquashuttle, Geordi and the others, together, must race against time and the dangers of the freezing seawater to escape the station before it disappears into an underwater abyss!

The cadets are about to depart for a mock away mission. Geordi is late as the result of a class overrunning, causing him to fall out with the stricter members of his team. Their destination is Atlantis Station, a research outpost studying a recently formed island which contains an active volcano.

During early studies of the volcanic activity, Geordi and some of the other cadets find evidence the volcano is about to erupt. The timeframe is unclear however and some of their colleagues ignore the findings.

They descend into the underwater station where they each control a robot conducting analyses of the rock bed. However, a series of earthquakes crack the station, causing water to pour in and seven researchers to drown. Geordi plays a leading role in getting the cadets to a shuttle through the submerged section and manually uncoupling the shuttle from the doomed station, with them making it safely back to the academy. 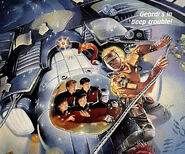 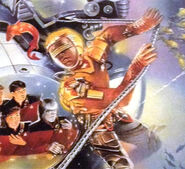 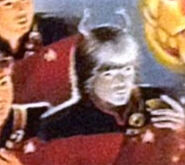