An automobile, also called a car or a groundcar (to differentiate from aircars), was a type of self-propelled vehicle designed for land-based travel, usually utilizing wheels and powered by an engine which ran on a fuel reaction.

In April 2063, just before Humans broke the warp barrier in Bozeman, Montana on Earth, car wrecks littered the immediate area around the Phoenix launch complex. The wrecks in included saloon cars, sport saloons, and minivans. The area was also the side of a dump truck and a mixer truck. When temporally displaced Borg established a base near the complex on April 04, they infected a minivan and the two trucks with nanoprobes. When agents led by Seven of Nine arrived at the scene, they disabled the power relays and the eliminated the Borg presence, then Seven used her own nanoprobes to remove the Borg technology. (STO - Legacy mission: "One Night in Bozeman")

In 2154, Captain Jonathan Archer and Daniels saw an image of an early automobile in the time stream as the timeline reset itself. (ENT episode: "Storm Front")

In the 2370s, San Francisco was known for having antique cars on its streets. (DS9 novelization: What You Leave Behind) These classic and vintage automobiles were favored by Voyager crew members Tom Paris and The Doctor. (VOY episodes: "Lifesigns", "Extreme Risk")

As well as being common to Earth, automobiles were also in use on various other planets, including Miri's homeworld, Sigma Iotia II, Magna Roma (TOS episodes: "Miri", "A Piece of the Action", "Bread and Circuses"), on the Orion world of Daros IV (FASA RPG module: Orion Ruse), and on Treva. (TNG novel: Survivors)

In an alternate reality, an automobile modified for time travel was deposited on Earth at some point prior to the 23rd century. In this reality, Emperor Vandar tracked this vehicle when it arrived in his space-time, captured its occupant, and took the vehicle to his trophy room. This particular vehicle was present when he captured and entertained Captain James T. Kirk and his landing party, who had been captured along with a number of Legionnaires from yet another reality. (TOS - Legion of Super Heroes comic: "Issue 5")

The car pictured in the comic was a cameo appearance of the time-traveling DeLorean from the Back to the Future film trilogy. 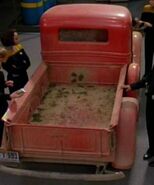