late-2386
Available Light is a 2019 Star Trek: The Next Generation novel by author Dayton Ward.

Section 31, the covert organization which has operated without accountability in the shadows for more than two centuries, has been exposed. Throughout the Federation, the rogue group's agents and leaders are being taken into custody as the sheer scope of its misdeeds comes to light. Now Starfleet Command must decide the consequences for numerous officers caught up in the scandal – including Admirals William Ross, Edward Jellico, Alynna Nechayev, and Captain Jean-Luc Picard who, along with many others, are implicated in the forced removal of a Federation president.

Meanwhile, deep in the distant, unexplored region of space known as the Odyssean Pass, Picard and the crew of the Starship Enterprise must put aside personal feelings and political concerns as they investigate a massive mysterious spacecraft. Adrift for centuries in the void, the ship is vital to the survival of an endangered civilization which has spent generations searching for a world to sustain what remains of its people. Complicating matters is a band of marauders who have their own designs on the ancient ship, with only the Enterprise standing in their way…

Following the exposure of Section 31, many of their agents are taken into custody, including the surviving Starfleet admirals who co-operated in the secret execution of President Zife. Admiral Ross and his defence lawyer are murdered in custody by Federation Security Agency agent Margo Dempsey whose husband Clark was killed by Uraei. However, with the USS Enterprise two months' travel away from Federation space, Picard is spared much of the scrutiny for now.

The Enterprise encounters a vast abandoned spaceship named the Osijemal and send an away team to explore. They are attacked by a boarding party from the Torrekmat, who had been aboard hidden and who were attempting to claim the vessel for salvage. The Torrekmat are apparently vaporised by a security system and their ship is also destroyed after attacking both the Enterprise and the Osijemal.

When T'Ryssa Chen is also struck by one of the security beams, it transpires that both she and the boarding party have been taken to the ship's occupants, the Nejamri. Their world will soon be uninhabitable and, with only limited warp capability, they were sent on a long journey to find a suitable world to colonise. Their physical forms and minds are stored within the ship's computer, sixty thousand of them, with them continuing to experience consciousness within a virtual environment. However, not only was the world they were aiming for unsuitable, forcing them to find a replacement, but their power is failing.

More Torrekmat ships arrive in response to a distress signal from the first. After another battle and the destruction of another ship, their commander, Brinamar, is convinced of the situation and agrees to help the Enterprise re-power the Osijemal with Chen and Elfiki helping to control things in the virtual environment. More Torrekmat ships arrive and refuse to believe Brinamar's story, attacking the Enterprise again, but are convinced to withdraw when faced with a fully powered Osijemal. The Enterprise crew give the Nejamri information on suitable nearby worlds before departing.

With the situation resolved, Picard elects to return and face the consequences of his actions, ordering the Enterprise back to Earth. 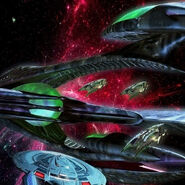