The Original Series No. 65

Captain's log, stardate 8668.2
Without explanation from Starfleet, the Enterprise has been diverted to Starbase 195, on the frontier of the Nilicia sector… Our mission involves transportation of an as-yet unknown envoy to an as-yet unannounced destination… About all we do know is that the Federation considers this mission to be of the highest priority… Spock and I are beaming down to meet the ambassador… whoever that may be.

Kirk and Spock are met on the starbase by Commander Megor. They are then joined by Ambassador Sidak and T'Rin, his assistant. The two Vulcans inform Kirk and Spock that there will be no briefing on their mission; they are simply to enter a data device into the ship's computer which contains the specifications for their course and speed.

On the Enterprise bridge, Sidak emphasizes that the ship's course must not be changed without his approval. He and T'Rin then proceed to their quarters, leaving Kirk and Spock put off by their aloofness. Later, on the rec deck, Kirk and McCoy are playing chess while Saavik asks Chekov if he finds the ambassadors' behavior offensive. She is concerned that Sidak and T'Rin may be reinforcing stereotypes of Vulcans. Spock enters and urges McCoy not to make the move he is planning. Spock is concerned by the safety risk posed by their proceeding with the mission without knowledge of its nature. McCoy and Kirk suggest that Spock discuss the matter with Sidak. McCoy makes his planned move, and Kirk immediately checkmates him.

Captain's log, supplemental
The Enterprise has picked up a distress call – giving us our next opportunity to butt heads with Ambassador Sidak.

The distress call is from Bupahr, a Federation mining colony threatened by unexplained toxic gas in the atmosphere. Kirk requests Sidak's permission to divert the ship to assist the colony; in response, Sidak finally agrees to give the senior staff a mission briefing. They are headed for the Nara'Gi system, named for two worlds that founded a twenty-planet Ordinat. The system is located in the Elikri sector, which has suffered a mysterious cataclysm that left it in a state of chaos similar to the early stages of galactic evolution. The Federation is negotiating a treaty to use the only safe passage through the sector, which passes through Nara'Gi space, but the Romulans have also been attempting to make such a treaty. The Nara'Gi care greatly about punctuality, so it is crucial that the Enterprise arrive on schedule. Spock asks Sidak if they may divert to Bupahr and compensate by increasing speed, and Sidak agrees.

Captain's log, stardate 8670.1
We've reached the mining colony on Bupahr. Following extensive orbital sensor scans by Mr. Spock and inspections of the mining facility by Engineer Scott, we have concluded that the toxic gas in the atmosphere did not come from the mining operation itself. So – where did it come from?

The gas is similar to the substance used by the Maroans when they attacked Epsilon Kitaj—and the Maroans were working for the Romulans on that occasion. The Enterprise medical staff neutralizes the gas' effect on the colonists, and the gas soon dissipates.

With the Enterprise under way again, Kirk is jogging on the hangar deck when he is hailed by Spock, who tells him they have received a disturbing message from the science vessel USS Hayden. A comet is on a collision course with Gamma Kestra, a planet with a population of several million at the technological level of medieval Europe. The comet could wipe out all complex life on the planet, and the Hayden cannot stop it. Kirk, Spock and McCoy meet with Sidak and T'Rin, but Sidak insists that the Prime Directive applies because the impending collision is a natural phenomenon. After Sidak and T'Rin leave, Spock suggests that some reason may be found to justify their acting to save Gamma Kestra. He determines that the comet's course has been altered, not by an encounter with a star or large planet, which would have caused the comet to lose mass, but artificially.

Captain's log, supplemental
Thanks to Sidak's grudging approval, the Enterprise has diverted and intercepted the comet… Using phasers, we are melting the ice and frozen gases holding the rocky core together, causing the comet to break apart harmlessly out in deep space, saving the people of Gamma Kestra from a dangerous collision and enabling us to resume course for our diplomatic mission to Nara'Gi.

When Kirk reassures Sidak that they will still reach Nara'Gi on time, the ambassador is unexpectedly philosophical, saying events are now out of his control. Kirk suggests to him that the Romulans may have arranged the diversions, but Sidak objects that they cannot have known the ship's planned course. Kirk believes a highly placed Romulan agent may be responsible.

Captain's log, stardate 8673.6
We've been forced to reduce speed as we make our way through the beautiful but dangerous cosmic chaos of the Elikri sector… As a result, we will not reach Nara'Gi on schedule. Somewhat to my surprise, Ambassador Sidak has accepted the inevitable… without recrimination. We are breaking subspace silence to inform the Nara'Gi leadership. 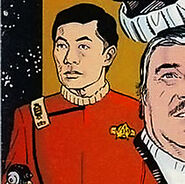 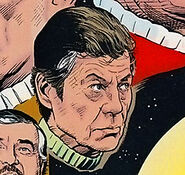 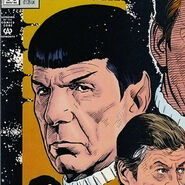 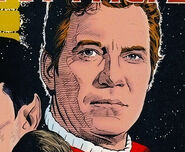