Unknown
"Bandi" is a Star Trek: The Original Series manga story from the 2008 anthology Uchu, published by TokyoPop, written by David Gerrold, with art by Don Hudson and shading by Steve Buccellato. This story was adapted from a story outline written by David Gerrold and submitted to Star Trek in 1967.[1] In this version of the story, Lt. Altman had beamed up an animal, but it escaped from the bio-lab and was seen fleeing through the corridors. It resembled a teddy bear and was highly empathic, projecting intense joys and fears that overwhelm the crew.

Uchu back cover
David Gerrold (writer of the classic episode "The Trouble with Tribbles") brings us a rumpus on the Enterprise as the mysterious, teddy bear-like creature Bandi runs amok with pretty virulent vibes.

Captain's log.
We have completed our diplomatic mission to Wokkle III. The planet has broad savannahs and beautiful forests. It was a welcome break for the crew and we were able observe many unique specimens....

Chekov, Sulu and Lt. Altman run into Kirk and Spock while searching deck six for an escaped animal. Altman had brought back the Bandi-bear from the planetary survey on Wokkle III and had been keeping it in the bio-lab. Kirk and Spock catch sight of the teddy-bear-like animal.

Captain's log, supplemental.
The stowaway creature has been captured and detained.

Analyzing it, Spock realizes it is highly empathic, radiating "a field of intense emotions as a defense against predators." Spock claims he is immune to its effects. McCoy says it isn't born pregnant but, despite assurances that it isn't a tribble, Kirk still wants it off the ship. Kirk decides to take it to a biological preserve at Cawley Station three days away.

En route, the creature continues to escape and is found sitting in the captain's chair, frustrating Kirk. Spock warns that the crew might not be able to withstand the intense emotional roller coaster the creature generates. After considering sedation or keeping it in a tethered shuttlecraft, they secure it in the aft section of the ship. Kirk's frustration has been turned by the bear into strong negative emotions that are assaulting the crew. Spock realizes he isn't immune and confesses that he's never felt emotions that intense.

That night Kirk dreams that Klingons, Gorn and Mugatos board the ship and kill Spock. Spock suggests that killing the Bandi-bear might be the only way to save the ship. Kirk hopes for some other way. To ease its fear, Kirk realizes he has to conquer his own fear. Kirk, Spock and McCoy approach the bear, but a security team turns and fires at them to defend the bear.

"Under its effects, the crew will protect it to the death," Spock reports. Approaching again, Kirk thinks friendly and happy thoughts, even thinking how being buried under tribbles was funny. It works, overwhelming the crew with feelings of love and friendship instead of fear. The positive feelings are so strong that McCoy confesses to Spock how much he admires and respects him. Spock neck-pinches the animal, and everyone returns to normal.

For the last few hours of the trip, the Bandi-bear is dematerialized and held in the beam of the transporter. McCoy says Cawley Station promises to give it lots of love and a good home. 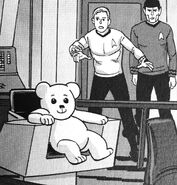 The Bandi-bear on the bridge.

Altman explains how the bear got aboard. 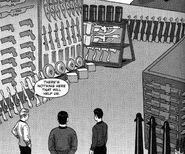