For other uses, see Battle Lines.

"Battle Lines" was the 13th episode of Star Trek: Deep Space Nine, in the show's first season, first aired during the week of 25 April 1993. The episode was written by Richard Danus and Evan Carlos Somers after Hilary J. Bader and directed by Paul Lynch.

A runabout carrying Benjamin Sisko, Kira Nerys, Julian Bashir, and Kai Opaka crashes on a planet in the Gamma Quadrant, where they meet a group of aliens who cannot die and have been fighting a war for centuries. 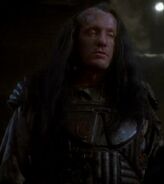 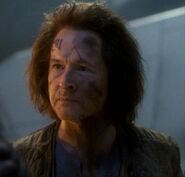