The Original Series (IDW ongoing) No. 41

22
"Behemoth, Part 1" was the 41st issue of IDW Publishing's 2011 ongoing series of Star Trek comics, written by Mike Johnson. This is the first part of the Behemoth story arc, illustrated by Cat Staggs.

Previously in Star Trek…
Following their encounter with the extradimensional entity known as "Q", Captain Kirk and the crew of the Enterprise continue their five-year mission into unexplored space. Far from the Federation, the ship is now on its own, as it encounters unprecedented dangers…

Star charts and navigational arrays are Pavel Chekov's constant companions. The majesty of the universe reduced to points on a map. So whenever he has the chance, he comes down to the crew lounge to witness the cosmic wonders with his own two eyes. Today he is joined by a recent transfer, Irina Galliulin, whom he fails to act confident in front of. Before he can fully embarrass himself however, he is called away by Spock, Irina promising to meet up with him later and help him with his "V"s.

In the mess hall, a noticeably more confident James T. Kirk chats up Carol Marcus, taking the opportunity to finally ask her about her career choice as a weapon specialist. Well originally Carol just wanted to crash the metaphorical boys' club but since coming aboard the USS Enterprise, she's given more thought to her minor in xeno-biology and has considered merging the two fields. Just as she requests assignment to away missions with new lifeforms, Spock calls them both to the bridge. Picking himself up, Kirk hopes that perhaps "Jim and Carol" can continue this later on.

Stepping onto the bridge, Kirk is greeted to the sight of a large, yet crippled, spacecraft. 0718 is able to gleam an almost musical transmission from the craft the repeats the word "Behemoth".

Soon enough, an away team is boarding the craft. At the helm, Carol soon discovers the source of the distress beacon and the sole passenger. The insect-like humanoid introduces himself but both his name and that of his world cannot be translated into Federation Standard. Instead he projects memories directly into the minds of the crew.

On an alien world, the natives gather in awe and horror as the red sun their world orbits steadily begins to dim. Later, the alien returns to his world, finding it lifeless and empty.

As Carol notes however, stars do not simply turn off so suddenly or cleanly. The alien confirms that the star did not die but was killed by a massive space-borne entity that feeds on them. A creature he has prosaically dubbed "Behemoth".

And as if the magic word has been spoken, the ravenous entity arrives. Finding the power reserves aboard the Enterprise much to its liking.

prior to the year 2262 (Kelvin timeline)
Enterprise encounters Q. (The Q Gambit) 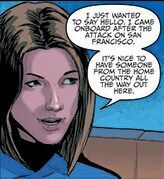