8221.6
"Behind Enemy Lines!" is a Star Trek: The Original Series comic published by DC Comics in 1985. The comic was written by Mike W. Barr, with art by Tom Sutton and Ricardo Villagran. It is the fourteenth comic in DC's first TOS comic series, and the sixth part of the New Frontiers story-arc. The title refers to two plots in the issue: The Spocks taking the Bird-of-Prey into Klingon space, and the Excelsior crew's rescue mission to a Terran prison.

Personal Log, Stardate 8221.6
My plan has failed! Posing as our ruthless counterparts of this parallel universe, my crew and I hoped to lead their invasion fleet to defeat! But though the Empire council has not discovered our true identities, they are aware of our intent! 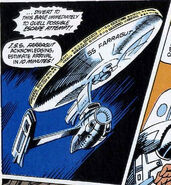 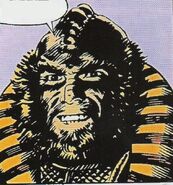 The Bird-of-Prey fires under cloak.