For other uses, see Beneath the Skin.

Klingons: Blood Will Tell No. 2

It's time for another glimpse at Star Trek history from the Klingon perspective, and this month we look at the origins of one of the USS Enterprise's most famous missions! Rocked by the events of the previous issue, the Klingon High Council turns to a new tactic in their struggle against the Federation: espionage! What will one Klingon do to prove his worth to the Empire? And what most improbable creature will stand in his way?

The day after discussing the incident at Organia, Kahnrah and K'ahlynn spend an evening outside bat'leth dueling. While battling, Kahnrah discusses understanding one's enemy with his granddaughter, warning that one should be wary of both under-and-over-estimating one's enemy, and continues his lesson in Klingon history in the telling of the story of Gralmek, an experiment in Klingon espionage.

Gralmek was a cousin of the House of Kahnrah, and a Mach ghotI', a Klingon of diminutive stature. Gralmek tried hard to train as a warrior, but despite his determination his body could not support his ambitions. Then, an opportunity arose; Gralmek and several others were selected to be offered an opportunity to serve the Empire. They were warned that the mission would be dangerous, painful, and could rob them of their identity, and Gralmek immediately volunteered.

From the mission log of Gralmek: Finally, a chance to prove myself in the eyes of my family and the Empire. I was quickly escorted off to a series of briefings about my new mission: Working for Klingon Intelligence.

The agents of Klingon Intelligence briefed me on the details of the aborted war between the Empire and the Federation. The Organians had interfered, halting the conflict, and preventing the Empire from crushing the Federation. The Klingon Empire would not be allowed to engage its Federation Enemies in natural warlike confrontation

Constricted by the terms of the Organian Peace Treaty the High Council had resulted to new tactics to further the expansion of the Empire, which the treaty had dictated had to be achieved by competing to best develop new worlds for their agricultural and economic potential. To achieve this the High Council had decreed a program of espionage, and Gralmek was to be the first test, which if successful would expand to an army of undercover agents. Gralmek's mission was to infiltrate Starfleet's Planetary Development Corps, and sabotage Federation colonization efforts. But first Gralmek had to be prepared...

Gralmek underwent drastic cosmetic surgery to give him the appearance of a Human; his cranial and spinal ridges were sanded and shaved down to give him smooth Human like features; thousands of forehead drillings were implanted to give him a Human hairline; and his skin was burned with acid to him a paler Human Caucasian-like pigmentation.

Eight weeks later Gralmek had recovered from the surgery, but already feeling less of a Klingon was appalled to learn from his doctor that, thanks to the limits of Klingon medicine, the procedure was non-reversible; he would have the appearance of a Human for the rest of his life. He would not however, as his doctor warned him, have the internal anatomy of a Human, and while on his mission would have to be careful to avoid being subjected to any deep medical scans.

While his scars healed Gralmek underwent training to learn to act like a Human: To eat Human food, and mask his distaste at the sweet flavors and mushy textures, and to use more delicate Human actions and ways of presenting one's self. Then Gralmek was ready.

Gralmek's mission was to take on the identity of Arne Darvin and sabotage the Federation's efforts to colonize Sherman's Planet by poisoning a shipment of quadrotriticale with a viral agent, which would result in the harvest not sustaining the colony and leading to fatalities - leaving the door open for the Empire to take over development of the planet.

From the mission log of Gralmek: The High Council had secured me a Starfleet uniform and forged credentials to get me on board the Lexington, which was ferrying my target to Deep Space Station K-7. Once on board, it was merely a matter of finding him and choosing the opportune moment to introduce myself.

Enemy or no, I refused to stab the Human in the back, despite my orders for absolute secrecy. One has a right to look his killer in the eyes.

After disposing of the body aboard the Lexington, I replaced Darvin and continued on schedule to Deep Space Station K-7, where I was to meet Darvin's new commander, a Human named Nilz Baris.

After weeks on the station awaiting the grain shipment Gralmek-as-Darvin had begun to develop a degree of loyalty to Baris. So when Baris had one of his "stupider notions" Gralmek argued against him not to go ahead with his paranoid plan – of issuing a priority one alert, fearing the Klingons could spring on the station at any moment. Which as Gralmek warned would call in any ship in the quadrant, and could land Baris in some trouble. Despite Gralmek's objections Baris issued the alert, and almost immediately the USS Enterprise arrived.

Darvin was not impressed by the pompousness, recklessness and overconfidence of Captain Kirk, but did enjoy his utter lack of respect for Baris, for whom he agreed to a post a mere two guards on the grain. Wary that Barris might be able to encourage Kirk to post more security Gralmek decided to accelerate his plans and infect the grain sooner.

Gralmek made his way through the stations repair ducts to get past the posted guards, and made use of his posting to bypass any security alarms. As he traveled through the bowls of the station he idly pondered whether his mission might be commemorated with a statue.

After three days Gralmek felt secure in the success of his mission, but was then summoned to the station commander's office by an irate Baris, who was exasperated at Kirk.

At this point Gralmek’s own logs ceased, and the rest of the tale was recorded by Captain Koloth, who had, by pure chance, been visiting the station at the same time for shore leave. Gralmek arrived at the office to be greeted by the angry screams of tribbles, the verminous balls of fluff which had recently infested the station. From their reaction Kirk was able to deduce Darvin was a Klingon, which his doctor, McCoy, confirmed with a tricorder scan. Still, Gralmek's plan had not been undone, but under the threat of a screaming tribble he crumbled and revealed he had poisoned the grain.

Koloth was forced to leave the station humiliated, and contacted his superiors to voice his frustration at the situation – complaining that if he had been informed of the espionage mission he would have not even visited the station. His conversation was interrupted by one of his crew, informing him of a tribble infestation in the engine room.

Meanwhile, Gralmek spent several months in Federation custody. The High council made it a priority to retrieve him, fearing he would give away more of the Empire's secrets, and organized a prisoner exchange to get him back.

After a debriefing Gralmek was escorted to the Great Hall and dressed down by the Chancellor. The Chancellor acknowledged the inherent riskiness of the mission, and Gralmek’s willingness to serve the Empire, but was appalled at Gralmek’s fear which had led him to rush his plans and reveal himself as a Klingon agent. As punishment for his failure Gralmek was discommended, and warned never to be found in Klingon space.

And so ended the age of Klingon espionage, and as far as Kahnrah knew, the story of Gralmek. K'ahlynn asks her grandfather if he has yet reached a decision on how he will vote on Gorkon's proposal, and what he could have learnt from this tale of cowardice. Kahnrah is still unsure about how he will vote, but the lesson he finds in Gralmek's story is that a Klingon can develop loyalty and admiration for Human adversaries, and so, perhaps Humans and Klingons aren't so different. 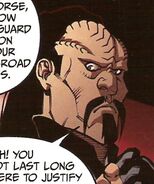 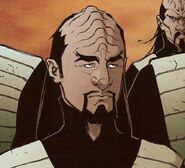 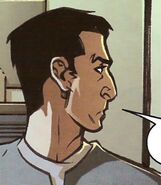 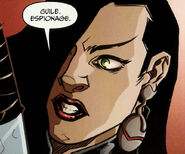