Throughout the history of the universe, there have been multiple timelines, alternate realities and parallel universes that have all contained versions of Benjamin Sisko. 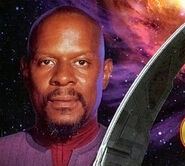 Benjamin Sisko, from what is considered the primary universe.

Benjamin Sisko in the mirror universe. 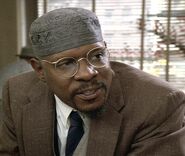 Benny Russell, Sisko's alter ego in visions from the Prophets.
Add a photo to this gallery

Co-leader of the Free Federation Resistance

Benjamin Sisko was a Human male whom James T. Kirk encountered after being transported into the future by Q. Sisko assisted Kirk in escaping Terok Nor and with him, intended to rendezvous with allies on Earth.

After the Earth's human resistance fell, Sisko grew up under the Klingon flag. when he was older he joined the Human Auxiliary Corps as a cargo pilot during the Klingon's war with the Dominion. He eventually started the Free Federeation Resistance movement and acted as spy for them.

In 2369, after James T. Kirk was transported into the future by Q, he was taken to Skrain Dukat, commander of Terok Nor. After a conversation, Kirk was taken to the holding cells where he reunited with Montgomery Scott, Nyota Uhura and first encountered Sisko.

Having found a way out, Sisko intended for Kirk, Scott and Uhura to come with him. However, Kirk refused, stating that he will not leave his crew. Sisko apologized in advance and rendered Kirk unconscious with a punch to the face. Beaming aboard the USS Defiant, when Kirk awoke, Sisko informed him that they are on a course to meet with allies on Earth, which Sisko implied, is very different. Sisko and the others were then taken to meet with the Klingon Chancellor Worf. However, the Changelings revealed and killed Worf. However, they were able to escape with help from Captain Keiko O'Brien and her husband first officer Miles O'Brien. Sisko then rendezvoused at Paradise with his son Jake and Jadzia Dax. Sisko then became a vessel for a freed Prophet, he and Kirk then decided to return to Terok Nor. However, he was killed by Dukat and the Pah-wraiths, but was able to transfer the prophet to Spock then to Q. (TOS - The Q Gambit comics: "Part 2", "Part 3", "Part 4", "Part 5", "Part 6")

In an alternate reality in which Curzon Dax was still the host of the Dax symbiont in 2371, Sisko commanded Deep Space 9. In this reality, the Dominion offered peace talks, which were held on DS9; Sisko, along with a Vulcan representative, negotiated for the Federation. However, the Dominion were poised to strike, and the moment the talks broke down launched an invasion. Federation forces were able to push back the Dominion attack; but not before Sisko, and other members of his crew, were taken captive.

What caused the talks to break down was the murder of Odo. Hoping to smooth things over with the Dominion, Curzon made an ambitious plan to retrieve another Odo from an alternate reality and have him claim the murder was a setup to smoke out the traitor who wished to disrupt the talks. Curzon eventually found his way to the primary universe and kidnapped Odo and took the USS Defiant back to his reality to carry out his plan. The crew of the Deep Space 9 of the primary universe then took Curzon's own Defiant in pursuit. Eventually, the two Defiant's made their way to a Dominion space station in the Calanon system where Sisko and his fellow prisoners were being held.

Upon escaping, the two realities' crews returned to their respective ships and made for the Bajoran wormhole. However, en route Odo figured out who murdered his counterpart: Kira Nerys. She was fearful of the threat a Dominion-Federation alliance might bring to Bajor. Hoping to redeem herself, Kira had Sisko and the rest of the crew take an escape craft, which the Defiant of the primary universe tractored back to their own DS9; while Kira remained in the wormhole and activated her Defiant's self destruct, to collapse the wormhole and neutralize the Dominion threat. (DS9 comic: "The Looking Glass War")

In an alternate timeline in which Khan Noonien Singh was victorious in the Eugenics Wars and Humans underwent genetic engineering en masse, Benjamin Sisko eventually rose to the rank of Lord-Commander in the Earthfleet, and commanded the space station D9, in orbit of Bajor. Princeps Julian Bashir considered Sisko to be like a sleeping volcano: a rumbling mountain, liable to explode in rage at any moment. Sisko had a son, Jacob Sisko, who served under Bashir. He was a direct descendant of Khan's followers Liam MacPherson and Paul Austin.

Sisko was never far from his bodyguard, Odo, whose reputation was as formidable as Sisko's; once at a festival on Bajor an assassination attempt was made on Sisko. Odo saw the attempted stabbing and enveloped the would-be assassin, crushing him. (DS9 - Myriad Universes novel: Seeds of Dissent)

First officer of the DefiantEdit

In a reality where the Cardassians maintained control of Terok Nor and discovered the wormhole, Benjamin Sisko continued to work on the USS Defiant at the Utopia Planitia Fleet Yards. In this reality the Founders colluded with the Cardassians to manipulate the Alpha and Beta Quadrants into a state of war, taking the identity of key figures in major powers to bring about a conflict between the Romulans and Klingons, and then by alliance the Federation. When Kira Nerys and Odo escaped Cardassian space with intelligence on the changeling infiltration Starfleet devised a plan to put a stop to it; Worf was put in command of the Defiant, which using a cloaking device was to enter enemy space, locate the changeling infiltrators, and eliminate them. Commander Sisko was made first officer of the Defiant due to his intimate knowledge of the prototype ship's workings.

Working with chief engineer Montgomery Scott, Sisko got the Defiant functioning well enough to carry out the mission, and the first changeling target on Romulus was located and destroyed. Their next target was on Qo'noS, however they arrived there to find the planet destroyed by the Jem'Hadar, with more Jem'Hadar vessels on the way. Seeing the Dominion planned to use the wrecked Qo'noS as a beachhead to take the rest of the quadrant, Worf had the Defiant set course for the system's star, and initiated a warp core breach there to eliminate the Jem'Hadar forces. Sisko spent his last moments with Scott in the engineering room, regretting he would never see his son Jake again. (TNG/DS9 - Myriad Universes novel: A Gutted World)

In January 2377, Benjamin Sisko of the primary universe had an orb experience using the Orb of Souls. There, he communed with seven other Benjamin Siskos from different parallel universes, who like himself, had been drawn to Bajor at some point during their lives and became the Emissary of the Prophets. The eight Emissaries had been drawn together to chastise Sisko for not having played his role in helping his mirror universe counterpart become the Emissary in that universe. The alternate Siskos at this meeting were:

Retrieved from "https://memory-beta.fandom.com/wiki/Benjamin_Sisko_(alternates)?oldid=663815"
Community content is available under CC-BY-SA unless otherwise noted.