The Betreka Nebula is a nebula located between the Klingon Empire and the Cardassian Union.

It was the site of the Betreka Nebula Incident between the Cardassians and the Klingons over the planet Raknal V and the wreckage of Ch'gran's fleet there. (DS9 episode: "The Way of the Warrior", ST - The Lost Era novel: The Art of the Impossible)

In the year 2375, during the Dominion War, the Dominion secretly used the Betreka Nebula to establish a Jem'Hadar base and ketracel-white facility on Raknal V. (TNG - The Sky's the Limit short story: "Four Lights")

In the stellar cartography of early 2409, the Betreka Nebula lay just outside the rimward border of the Almatha sector of the Alpha Trianguli sector block. Later, it was placed within the sector's borders, close the Aria system. (STO - Cardassian Struggle mission: "Heading into Deep Space")

By 2410, the nebula was part of the Betazed sector, at a location between Betazed and Aldebaran. (STO - Victory Is Life mission: "Welcome to Earth Spacedock") 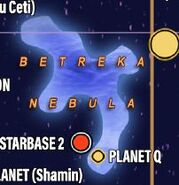 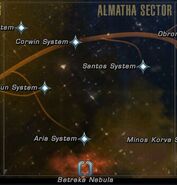