unknown
"Beware the Beast" was a Star Trek: The Original Series comic strip published in 1969. It was the third story in the UK comic strips series, and was released in four parts, in issues of Joe 90: Top Secret.

In this story, the crew of the USS Enterprise searched for missing families of sentient apes on the planet Angoma.

Teaser summary, 12 April 1969
Captain Kirk and members of the Starship Enterprise’s crew are captured by Mantis insects and placed in a zoo.

A friendly sword-fight with James T. Kirk and Gif in a stadium full of gorillas is just the start of the USS Enterprise's diplomatic visit to Angoma. During a dinner with King Kut, a Angoman reports that his family has vanished, another of a series of unexplained disappearances. Kirk volunteers to investigate, and brings a team of crewmen with him to the gorilla's house. But once there, they are suddenly transported off-world, rematerializing behind the bars of a cage.

Aboard the Enterprise, David Bailey tries to track the mysterious transporter beam but is unable to find its source, so Spock orders the ship to travel along the path of interference caused by the beam.

Kirk and his men are confronted by three Mantis, who enter the cage and shock the people unconscious with metal rods. Hours later, when they awake, they are just one of numerous exhibits in a zoo. All attempts to communicate with the giant, sentient praying-mantis species are ignored. After nightfall, the crew use their lasers to disintegrate their cage bars and escape. They release one of the missing gorillas and inadvertently release an enormous Nogik spider, who threatens to crush one of the crew with its pincers until it is killed by weapons fire. A pair of Mantis chases the crew and the gorilla into a building. They locate a transporter with an extremely long range and set it to return them to Angoma, but instead materialize on the rocky terrain of an unknown planet. Spotted and chased by savage humanoid natives, the group flees into underbrush, but are captured in a large net.

Meanwhile, the Enterprise arrives in orbit of the Mantis planet. Hinton, Spock and three others take a space wagon to the surface and repel a wave of attacking Mantis, firing needle-guns set with non-lethal paralyser charges. Spock releases a caged humanoid, a government official from Dobrovia, who says that Kirk's group has already escaped to another world. The official leads Spock's team to the Mantis transporter and beams them where Kirk went. Spock's team spots a large fire and tracked down Kirk's group, who has been tied to posts and are about to be burned alive by the savages, now revealed to be cannibals. The natives flee at Spock's approach, and Kirk's group is released.

The next day, back on Angoma, a team from the Enterprise plays a game of soccer with one of the gorillas, losing to the ape's far greater agility by a score of 16-2. 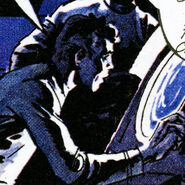 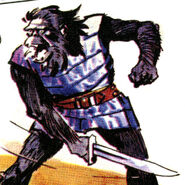 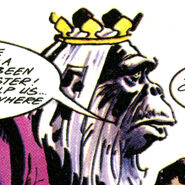 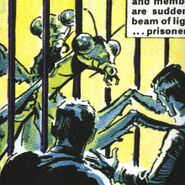 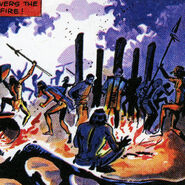 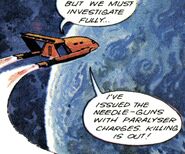 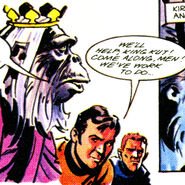