The Original Series No. 8

There is sabotage aboard the Enterprise, and Spock's investigation leads him into defiance of the Federation and a bizarre alliance with the Romulan and Klingon Empires against the bloodthirsty Tomarii—a savage race for whom war and battle are life itself.

Now Spock has been declared a traitor and condemned to the shame of the Federation's highest security prison. And now Captain James Kirk must face the toughest decision of his command, while a lifelong friendship and the destiny of the free universe hang in the balance!

There is sabotage aboard the Enterprise, Captain Kirk is seriously injured and Spock's and Scotty's investigation leads them into defiance of the Federation and a bizarre alliance with the Romulan and Klingon Empires against the bloodthirsty Tomarii - a savage race for whom war and battle are life itself. They, two Klingons, and two Romulans are captured by the Tomarii, and Spock subsequently gets paralyzed by a sliver of metal in his back. Spock and Scotty, the only two surviving members of the capture, get rescued by the Enterprise. Spock is put on trial for treason, and convicted on a technicality.

Now Spock has been declared a traitor and condemned to the shame of the Federation's highest security prison, Minos. He manages to escape with a Romulan named Desus, and joins the pirates on Ceta V. Desus comes up with a cunning plan for the two of them to work together as one pirate known only as "Black Fire". After his exploits are finished, he joins the Romulan Empire to attack Tomarii, but he makes it back to the Federation.

Spock returns to the Federation on the Enterprise where Kirk says that there is something wrong about all of this, and then reaches the conclusion of "You were a plant! By God Spock, you aren't a traitor at all!" Uhura then arives with the news that Spock has been cleared of all charges. The book ends on a humorous note with McCoy asking Spock for his autograph as Black Fire, and Spock instead giving him his earring. "The black jewel gleamed with a strange luminescence on McCoys palm, but it was nothing compared to the gleam in Spock's dark eyes." 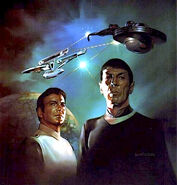 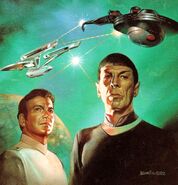 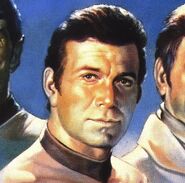 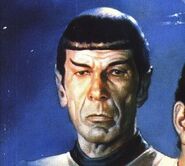 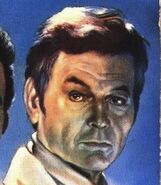