Body armor was a type of clothing worn to protect the wearing from dangers such as assault. (TOS novel: Planet of Judgment)

The Vulcans of Darien 224 possessed body armor which could withstand laser pistol fire, but it was less effective in resisting fire from a phaser rifle. (EV comic: "Cloak and Dagger")

In the 23rd century, USS Enterprise personnel had body armor that zipped itself up, leaving no seam. This armor was like silk, but an impact would render it rigid. (TOS novel: Planet of Judgment, Heritage Models RPG module: Adventure Gaming in the Final Frontier)

The Starfleet uniform of the early 2270s included body armor for security personnel on starships. (TOS movie: The Motion Picture)

The Naazh were a faction that employed color-coded body armor during their attacks on telepathic Federation citizens, the Aenar and New Humans, in 2278 and 2279. (TOS novel: The Higher Frontier)

In 2359, members of the USS Starbound crew attended a Starfleet Security briefing about a new type of Orion body armor at Starbase 36. (TNG novel: Survivors)

On 03 April 2385, Department of Temporal Investigations agent Meyo Ranjea attempted to apprehend the criminal Daiyar on the spaceport of the Qhembembem Outpost. When his phaser fire left her unfazed, Ranjea deduced she wore body armor under her cloak. (DTI eBook: Shield of the Gods)

By the year 2409, the Federation, Klingon Empire and Romulan Republic offered body armor as standard equipment to their starship commanders and their bridge officers. The body armor was invisible by default, integrated with the uniform or other clothing, just like apersonal shield and kits. Tailors of the Khitomer Alliance were able to add visible body armor components to an officer's outfit.

When the USS Miranda-B responded to a Borg invasion of Vega IX, Ensign Byarnez was authorized by Commander Kelly to equip the Miranda away team defending Vega Colony with a phaser sniper rifle, personal kit, and body armor. (STO - Assimilation mission: "Gather Equipment") 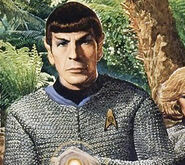